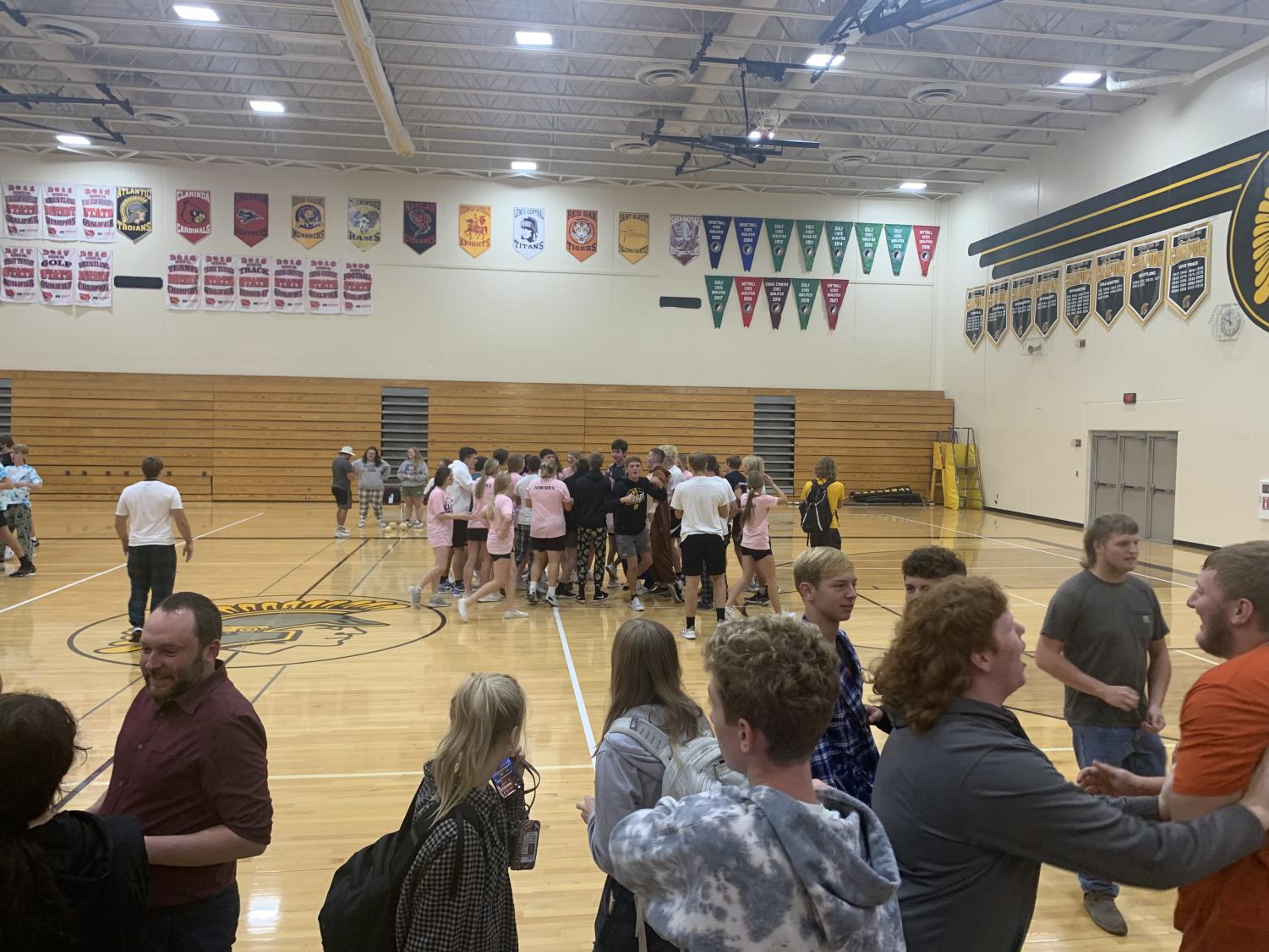 During Homecoming week, teams assembled together for a dodge ball tournament. A tournament took place on Tuesday, Oct. 5, and Thursday, Oct. 7. 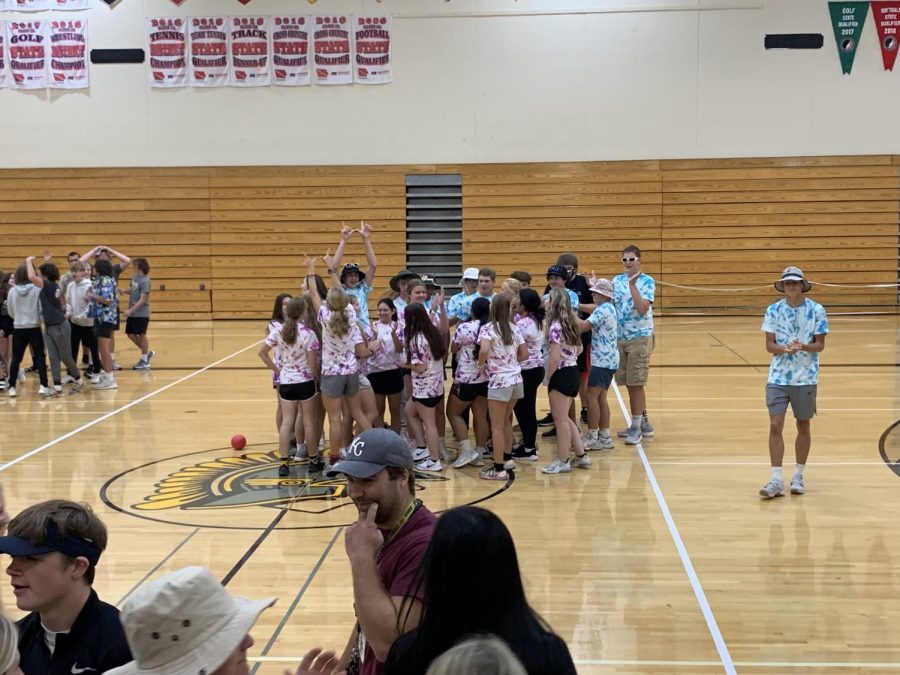 The sophomores celebrate after their victory against the freshman.

Dodgeball is a Homecoming tradition at AHS. After the absence of it last year due to COVID, dodgeball has made a comeback for the high school students. This is the first time the freshmen and sophomores have played.

Starting off the games, the freshmen and sophomores went head to head. Sophomores wore matching tie-dye shirts and the freshmen styled pit vipers. The sophomores barrelled in, taking most of the dodgeballs. Many freshmen were out during the first moments of the game by catching balls or throwing them directly at someone. The game was head-to-head with the coaches having their anticipation high. Freshmen were dropping like flies, leaving Alexis Hoyt and Hailey Huffman facing five sophomores. Sophomore Nicole Middents a ball at Huffman, resulting in only Hoyt being left for the freshman team. Sophomore Quincy Sorensen threw the last ball of the game, ending the freshman team’s shot at winning. The crowd roared.

Next was the highly anticipated upperclassman game: juniors, showing up in all black, and seniors wearing Tacky Tourist Tuesday gear. With a strong start, juniors snatched most of the balls from the middle. Senior Addison DeArment threw the first ball attacking the juniors. DeArment was struck out, and most of the seniors followed. Juniors had more students playing than seniors. After a neck-and-neck game, Aspen Niklasen was the only senior left. Junior Jada Jensen threw the last ball of the game at Niklasen, taking the seniors title. Juniors stormed the floor and also won the best sportsmanship competition.

Stay tuned for Thursday when the freshmen and seniors face off for third and last place while sophomores and juniors compete for the title. 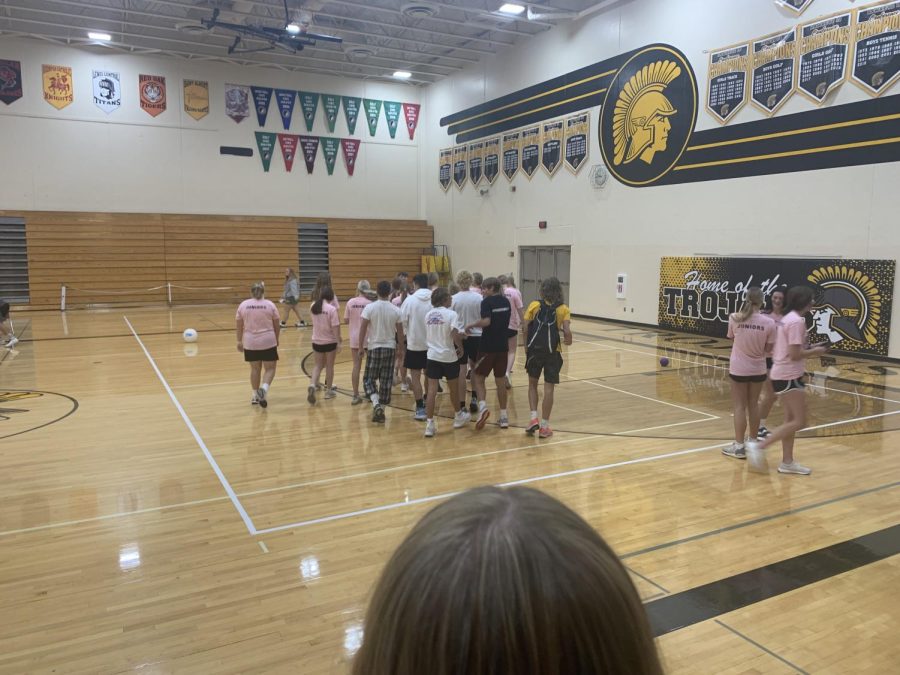 The junior dodge ball team prepares for the final game of the day.

Starting off, the senior team and freshmen team faced off for third and last place. Senior Addison DeArment started off with a bang, getting the first ball on the court. The senior team also got most of the balls and threw them at the freshman team. The game was super close due to caught balls, throwing heat, and dodging throws. Soon, there were six freshman girls and multiple seniors. Soon it was down to Freshmen Rylie Vandevanter and McKenzie Brown. DeArment threw a ball at Vandevanter, resulting in only Brown being left. A senior threw the last ball at Brown, proceeding in freshman getting last and seniors getting third.

Following, two out of three games occurred between the sophomore team versus the junior team. Both having matching shirts, it was a close three games. In the first game, juniors got most of the balls from the middle. It was a very close game with Alexes Reynolds and Ava Rush left for juniors. Sophomore Quincy Sorensen threw a ball at Reynolds, making Rush the only one left for game one. Franchesca Gonzelez, sophomore, threw the last ball at Rush during game one.

The last face-off was brutal, anticipating, and nail-biting with a ton of cheering. Junior Lindy Eblen threw a ball at sophomore Makayla Atkinson, leaving three sophomores left compared to a number of juniors. After a minute, sophomore Belle Berg was left. Jada Jensen caught the last ball of the game, following the juniors, champions. The juniors stormed the court. Freshmen and seniors both won sportsmanship.