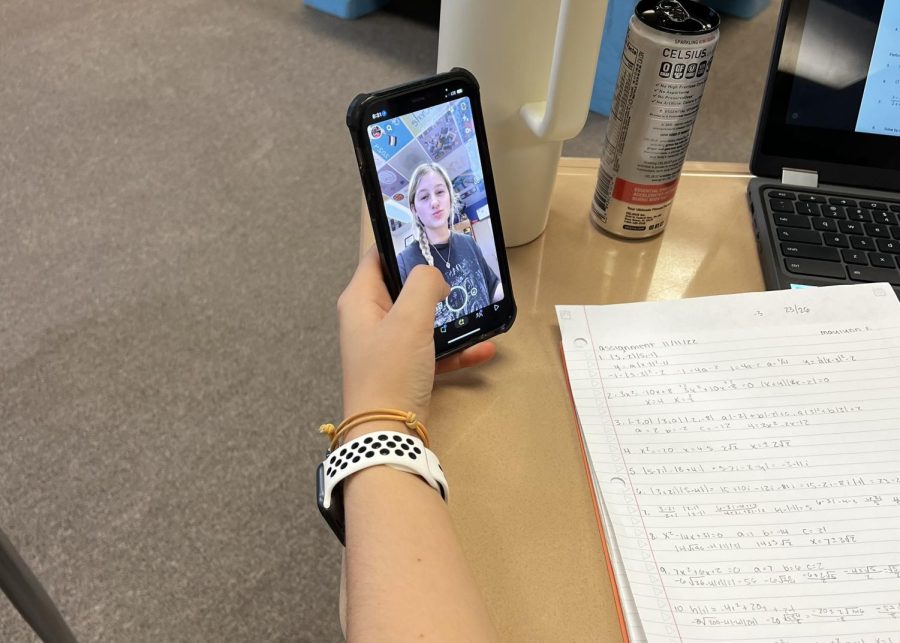 Junior Maylynn Ferrell goes on Snapchat during class. Being on your phone during class is against the policy.

This year, Atlantic High School added a new policy to the student handbook that caused many different feelings. Some students think the phone policy is beneficial to them and others are still upset.

The New Phone Policy Proves Positive for Students at AHS

At the beginning of the 2022-2023 school year, Atlantic Community School District implemented a new cell phone policy with the hope to decrease distraction levels in the classrooms. Under the Electronic Devices and Cell Phone section of the Student Handbook, “Electronic devices, including but not limited to, cell phones, electronic games, laser pointers, personal music players, tablets, personal Bluetooth devices, smartwatches are not to be used by students during class time…Electronic devices cause disruptions and distractions to the learning environment.” At first, many students thought the new rule was taking things too far, but as the school year has progressed phone-free, some students are noticing an increase in their concentration levels during school.

UWHealth says that the presence of cell phones, even if the phone is turned off, creates a distraction to the phone’s owner. Productivity is often raised when technology is not heavily in use. According to HealthGuide, prolonged exposure to social media can lead to increased mental health problems in young adults, such as depression and anxiety. The use of social media can also lead to unhealthy behaviors such as comparing one’s self to others and cyberbullying. Spending time in the “real world” is an important aspect of our socialization.

Junior Kelsey Pross originally thought the new phone policy was “absurd,” but later realized it was actually helpful. Although others often call her opinion “stupid,” she feels that being phone-free can reduce conflict at school. “Last year there was texting throughout classes that caused drama in the halls and in the class. It’s more positive now because people aren’t cyberbullying, spreading secrets, or even cheating,” she said. Pross said the new phone policy has positively affected her mental health. “Last year, I had a lot of breakdowns because of my phone. Now that we have a policy, I think it makes it ten times better for everyone.” She thinks other students should be more accepting of the policy so they can learn real-world skills. She said, “If you’re on your phone all the time, you don’t know how to get a job, communicate with people, or understand facial expressions.” Pross said that reading text messages is a different experience than having a face-to-face conversation. “It’d be better without having phones because we do not know how to communicate with each other with facial expressions, or how to look at people with eye contact,” she said.

Like Pross, fellow junior Kaiden Hatley thought the new phone policy sounded “really stupid” when it was first introduced because she didn’t like the idea of not having her phone on her. But, she soon began to understand that the new policy has had more positive effects on students than she initially thought. “I realized it’s not as bad as I thought it was,” she said, but Hatley is not a fan of how harshly it’s enforced, because some students are getting in trouble for putting their phones away after the bell has rung. But, she said, “it can have a positive effect because people don’t get distracted as much and they can just focus on their work and get their work done.” A personal positive outcome that Hatley has experienced is not having to worry about what’s happening on social media while at school. She thinks others should be more accepting of the new policy because “a lot of drama happens on your phone, so that gets rid of an outlet to the drama.”

A survey was sent out to all AHS students regarding the new phone policy, of which 72 of them responded. About 26% of those students said that the phone policy has had a positive impact on them and their classroom experience. 23% of respondents have felt less distracted during class time, and continue to see their concentration levels improve. One question asked students to rate whether or not they feel like having a break from social media during school hours has been relaxing or frustrating for their mental health, to which 20% of students responded saying that they feel good about having a break from their phones. As the school year continues, some students might see a shift in their behavior that is directly related to their phone usage.

Watching TikTok, scrolling through social media, playing games, and being able to talk to friends is the norm for many students. Imagining a life without tech and social media can be challenging for many students. According to ABC News, teenagers spend an average of seven hours and 22 minutes on their phones, not including time for schoolwork.

According to the Washington Post, by 2020, 77% of schools have banned phones. This year, Atlantic High School joined the percentage. According to the student handbook under the Electronics and Cell Phone section, it states that “ “Electronic devices, including but not limited to, cell phones, electronic games, laser pointers, personal music players, tablets, personal Bluetooth devices, smartwatches are not to be used by students during class time…Electronic devices cause disruptions and distractions to the learning environment.” This newly implemented policy upset student across the high school.

One student that feels strongly about the phone policy is junior Christien Foegen. He thinks that the phone policy has been an inconvenient change from last year. “I think it’s really helpful overall to have [phones] because I can listen to music and type better. The big change is not having my phone out. I used to have it out maybe once or twice a period, depending on who the teacher was and how they reacted.” Foegen has not been caught on his phone this year and strays away from using it. If he could change the phone rule, he would change it to be more lenient. “Study hall is the only period that I care to have it. Study hall, you should be able to use it because it’s the time the school is giving you. If you don’t do your work, that’s on you. I think educators are doing quite a good job of enforcing the phone policy, but specific people don’t get caught with it. It feels like it’s targeted,” said Foegen. “Everyone equally needs to be punished or not at all”

Senior Lance Keller also has an opinion on the phone policy. “It’s not that I don’t necessarily like it, I think it can work, I think it’s just the implementation of it and the way they went through with it,” said Keller. He thinks the phone policy can work to an extent and he likes the idea of putting it away during class time. “The teachers are really strict with it. They will see a phone and instantly take it, even if you’re putting it away.”

Like others, freshman Dasia Baxter also doesn’t like the new policy. “I think the phone rule tempts people to go on their phone more,” said Baxter. “Certain rules only pertain to certain people and that’s what I hate.” Baxter reminisced about when she broke her arm and none of her family picked up the phone except her grandma. “I have severe separation anxiety from my family,” she said. She would change the phone policy by having students keep in mind respect. “If people could be respectful and know when to and not to use their phone, it would be fine.” She agrees with Foegen that students should be able to use their phones in study hall. “It’s made me feel irritated because I would have texts from my mom saying how she would pick me up after school. I would be able to text her if I was being bullied or feeling sick. Now I can’t do that because of the policy,” Baxter said.

Students at Atlantic High School took a survey about their thoughts about the new phone policy. Around 63% of the students reported that they were upset with the new policy and about 52% of students are still upset. Almost half of the students (49%) thought the phone policy has negatively impacted them and others.