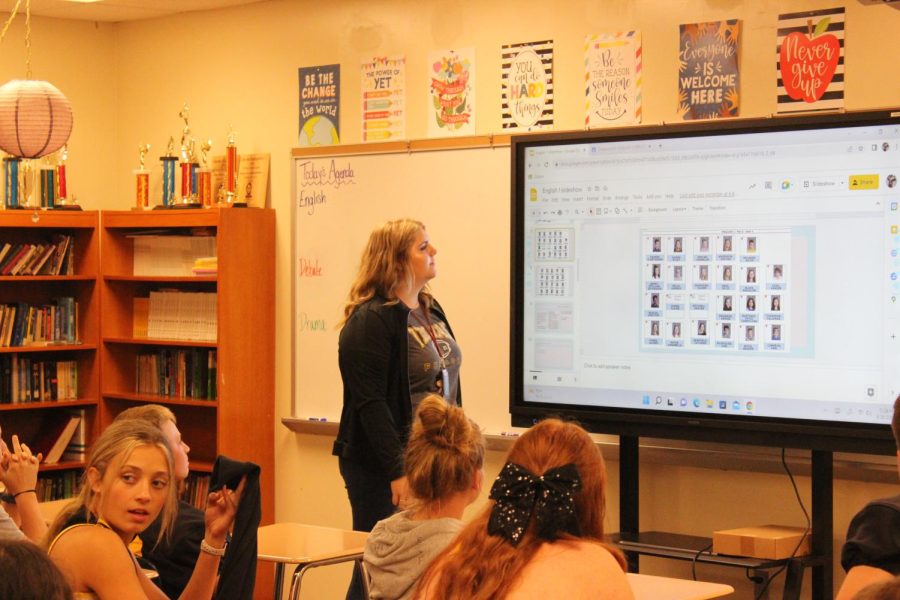 Taking on Debate, Drama, and coaching cheerleading on top of four sections of Freshman English 1 class would be a lot for most people, but new teacher Katie Hedegaard says it’s a way to challenge herself and her skills. Hedegaard was previously a 7th-grade teacher. She loved teaching middle school, but the transfer to the high school was a blessing in disguise. Now she’s able to work with kids she would’ve never met before as they’d be older than the age group she worked with previously.

Hedegaard grew up in Underwood, IA. She is in the middle of two sisters: her older sister Skyla and her younger sister Julie. “Julie’s in the military (army) so I don’t get to see her all that often.” Hedegaard attended Iowa Western Community College in Council Bluffs and transferred to the University of Iowa to receive her Bachelor’s Degree. She is now engaged to her fiancé, Anthony. They have two cats and an axolotl, which is a pale pink amphibian similar to a salamander. She enjoys reading, playing video games, and traveling. This year alone, Hedegaard traveled to Seattle, California, and Colorado. She said she prefers driving over flying “because you get to see more.”

Transferring from 7th grade has also changed her teaching methods. “I’ve become more strict and have more expectations since these kids are now in high school. The maturity level is going up, so you can expect more out of them.”

Hedegaard has always wanted to go into teaching because many of her family members were teachers. She had thought about other jobs, but none that would be as fulfilling. “Teaching is very rewarding.” Her goals for the coming years are to challenge herself and see where she can be helpful in the community. “I want to push myself to use what I learn as a high school educator and bring it back into my middle school classroom in the future.”

The thing Hedegaard is most excited about this year is Football Cheerleading. She said the program has been changing quite a bit, and it’s all good things from what she can tell. “There’s a lot of new girls who are very talented, and having a squad of over 20 girls is pretty impressive.”

Hedegaard is looking forward to the school year and is glad she feels welcome at the high school. “It was a stressful transition so thank you to all the staff and the community for helping me out when I needed it.”