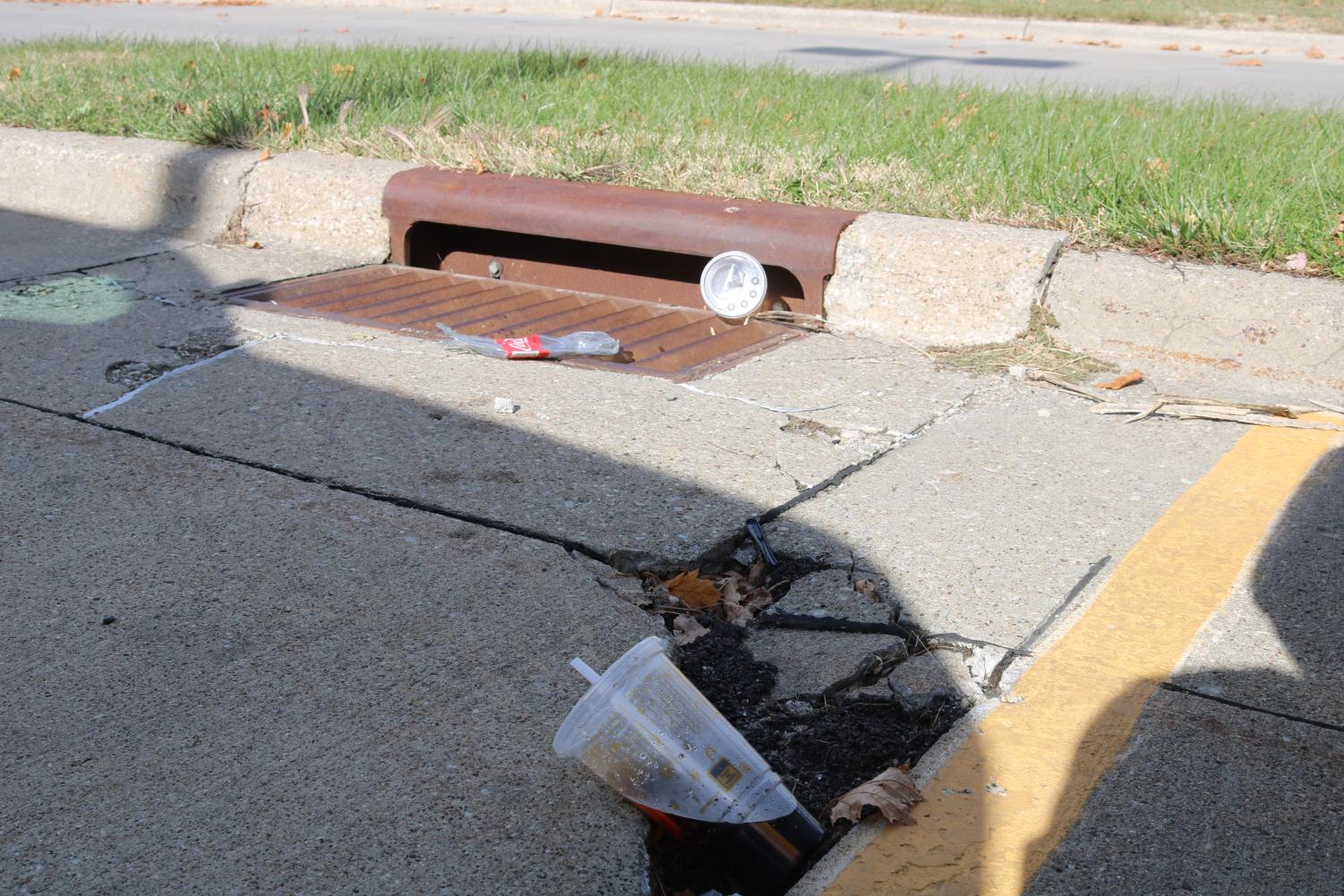 Trash litters the school’s parking lot every day after school.

Trash on the school grounds is a problem worth solving.

Two students write about the struggles AHS has with trash around the school campus. One student shares the news of the issue while the other shares an opinion. 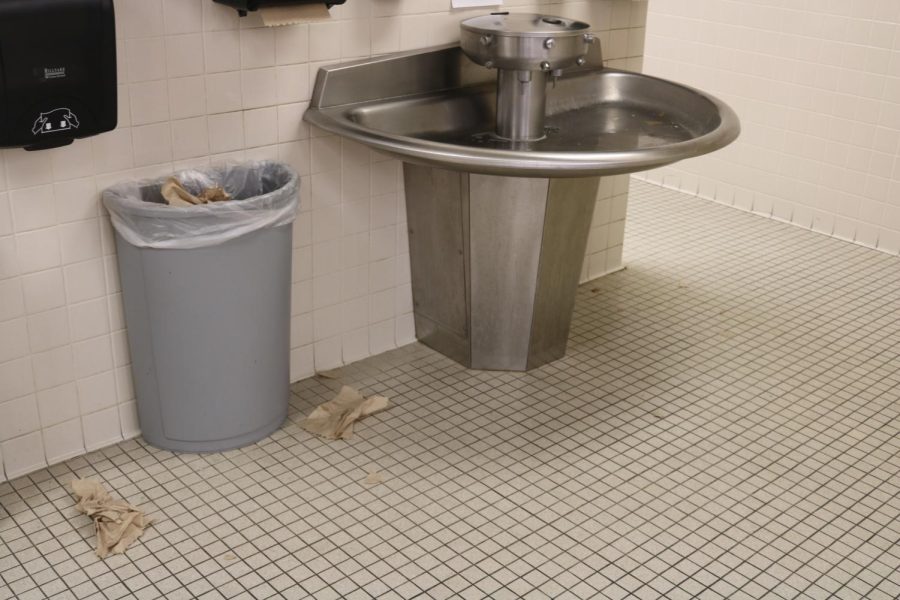 Trash litters the floor of the restroom in the commons. This is the most commonly used restroom in AHS, but also most trashed.

A noticeable upsurge of trash has become an issue at Atlantic High School, and students aren’t the only ones who have noticed. “Clean up after yourself. It’s not hard, just pick up your own trash and call others out,” said Spanish teacher Dan Vargason.

There is a direct correlation between the cleanliness of a classroom environment and overall learning ability. According to Office Keepers Arizona, trash in a school can collect bacteria and increase the chance of illness for students and teachers. Trash can also have an effect on students’ ability to focus.

In a story posted to Southern Methodist University’s online Daily Campus, teachers are also happier in a clean classroom and have all the materials they need, and that isn’t available if the custodians are busy picking up the trash. 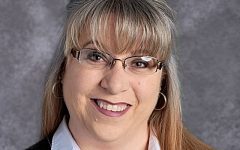 This [school] is my home and I don’t like seeing my home disrespected.”

Atlantic High School Principal Heather McKay commented on the increased trash around AHS: “It’s extremely frustrating and disappointing. I think it’s a basic sign of respect to pick up trash. This is my home and I don’t like seeing my home disrespected.”

Sophomore Tate Niklasen also noticed the trash building up around the school. “Every day I go in and there’s at least one piece of trash in the stalls or the urinals.”

Another person who is passionate about making a change Vargason. As the cross country coach, he has added picking up the trash into the runners’ practice on occasion. “Coach (Brad) Rasmussen started it. He was bothered by trash and he would pick it up whenever he saw it, so we took that job,” said Vargason.

The team collected trash of a wide variety, including cups, boxes, bags, napkins, and even some unique trash as well. “The team is instructed to go pick it up if you see it during a run, but during the two practices they spent picking it up the team has filled probably about 15-20 full bags,” said Vargason.

“It feels good to do something productive that benefits the school. It feels good doing the school service,” said cross country runner Bennett Whetstone.

The high school is planning on buying new trash cans for the parking lot. “There will be trash cans by where the students congregate after games and to hang out. They should be able to throw it away easily,” said Vargason, who worked with McKay to get these trash cans. The trash cans are planned to be concrete so they don’t blow away. They will be black and gold and located on the islands of the parking lot.

“Do your part and this will be resolved,” said Vargason. A wide range of people are affected by the trash. Teachers, students, custodians, and anyone who visits the school. You can do your part and help the community in just a few seconds. 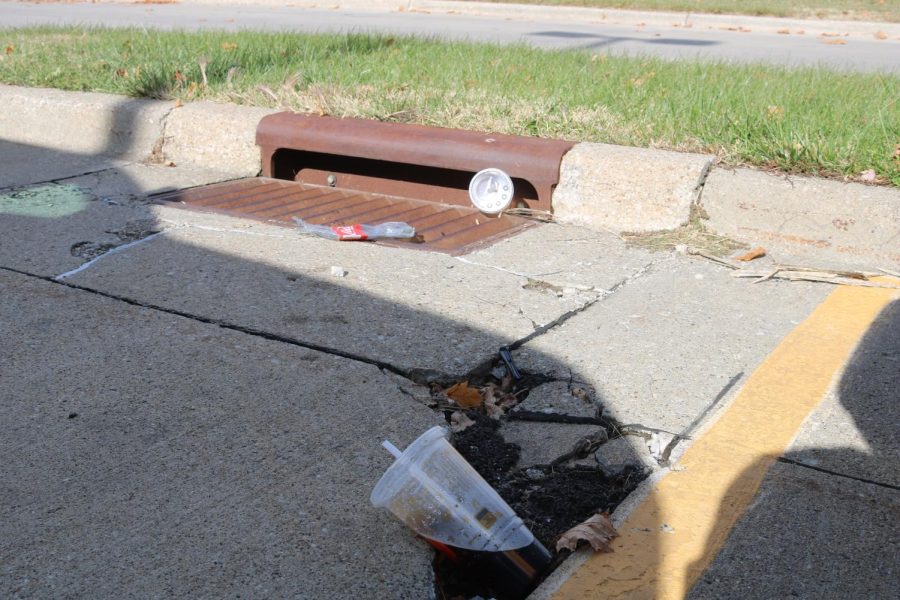 Trash litters the school’s parking lot every day after school.

Trojan pride has been kicked to the curb in the first months of the 2021-22 school year. Trash littered throughout the school and around the grounds has hurt the Trojan honor. Things like food bags, coffee cups, and wrappers are the most common in the parking lot. The amount of litter scattered in and around the bathrooms is excessive when there’s a trashcan two feet away. It’s simply disappointing.

We were taught from a young age to pick up trash we see and make sure any trash we have makes it into a trashcan. Yet this has not been shown in the hallways of AHS. Somehow we have forgotten all that we learned about simple respect for the place we spend so much time in. About 5,460 hours of our lives are spent in high school. This equals out to about 4 percent of our lives. Four percent of our entire lives are spent in one building: a building that we trash and then complain about.

Our four custodians and two groundskeepers already have numerous other jobs they are responsible for. There is no reason for us to make their job harder by leaving trash everywhere. When did we lose respect for those who care for our school? 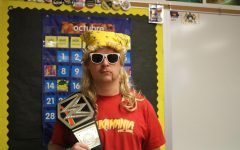 It definitely makes me mad. When I see it I shake my head, it’s not that much work to throw away the trash.”

In addition to the trash inside the school building, McDonald’s bags and broken bottles are among the items collected in the parking lot. This behavior is truly disappointing and disrespectful. Many students, teachers, and other adults around the school have noticed it. Spanish teacher Daniel Vargason said, “It definitely makes me mad. When I see it I shake my head, it’s not that much work to throw away the trash.” Along with that, it causes them to have little hope in AHS students. “It proves that people don’t take responsibility for their actions,” he said.

From trash, the problem extends to vandalism. The decals on the bathroom stall doors were meant to spread positive messages. Students and counselors worked hard to put these up before the school year started. But these decals are now being peeled off. The school spirit club, AHS Fuel, puts time into making and taping the “Tinkle Times” each week to keep students informed and entertained. These postings are then consistently torn down and destroyed.

A small change in the way students act can cause a big change in the school. Merely pick up after yourself. If everyone cleans after themselves, then you shouldn’t have to clean up after other people. Picking up trash takes only a few seconds. A few seconds out of 5,460 hours that we spend in the Atlantic High School Building. It’s that simple.