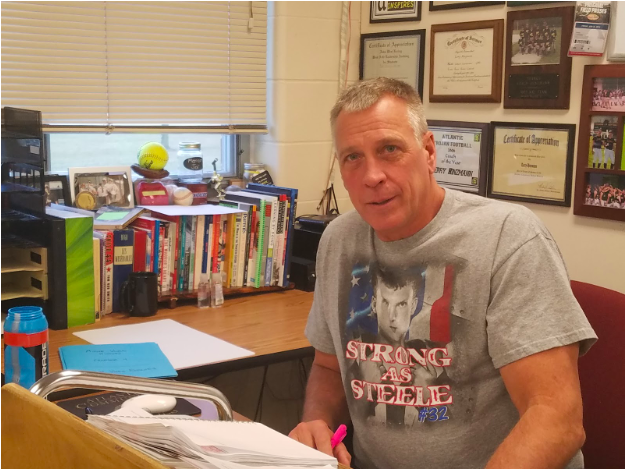 Terry Hinzmann teaches world history classes. His old-school style was slightly shaken up due to COVID-19’s online learning opportunities, yet he has been adapting to the foreign style of online exams.

History teacher Terry Hinzmann prefers students to use pencil and paper when handing out tests.  He says that it’s a “little old school” but that, “I just feel like it’s easier and more comfortable for me.” The impact of COVID forcing remote learners has changed Hinzmann’s style slightly, making him send out more essay-like questions for them to respond to. While he is not fully prepared to switch to online testing, the remote-learning experience is allowing him to get “more proficient at it.” His belief is that tests are a necessity in any form. “As educators, we need to have some type of assessments to report out on what students know and what they don’t know,” said Hinzmann.

Hinzmann uses essays on his test, though usually there are anywhere from four to six options on what a student can write about (correlating to the unit they’re working on.) “Part of my testing would be me asking my students what they know,” said Hinzmann. He also believes that he could “incorporate other skills” into tests, such as having the essays in order to improve student’s writing capabilities. Before the first test of the semester, Hinzmann goes over how to properly format an essay in order to teach kids the proper way to write an essay response.

The main advice he would give to students is for them to study in smaller portions rather than trying to study the entire thing on the night before a test. He says that the night before a test should be used for review instead of an attempt to ‘study.’ Hinzmann thinks that students should be able to apply the information they learn rather than relying on “rote memory” (memorizing just the facts without knowing why they’re memorizing the facts). Hinzmann said, “It’s the application of the knowledge they gained that is the real critical point.”