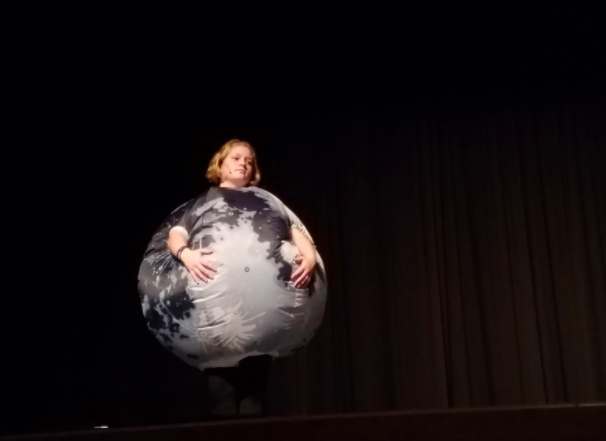 While McFadden’s main role in the musical is as the character Grandma, McFadden also plays as the moon for one of the songs.

“People should come see the Addams Family because it has incredible music and a great cast,” said senior Molly McFadden who plays the role of Grandma. McFadden is “excited to be back on the stage and get to see the audience’s reactions when we perform.”

One of her favorite parts of the musical consists of the scene “Full Disclosure” that occurs at the end of Act I.  “Everyone’s on stage the whole time and there’s so many inside jokes, so everyone just laughs,” said McFadden. Meanwhile she appreciates the effort put in by backstage crew and the pit. Her favorite character is Fester, played by sophomore Micaciah Andersen, due to the fact that “it’s super silly and he plays the part so well.”

As grandma, it’s the first time McFadden has played a named character in a musical. “I love my role.” She believes that it matches her personality well and is a blast to perform. “I also get to play the moon which is super silly and so much fun. It cannot be described in words. You have to see it in person.” McFadden’s favorite song is “Happy/Sad” due to its lyrical context.  “The lyrics are super sweet and the song just means a lot to me because it’s my senior year.”