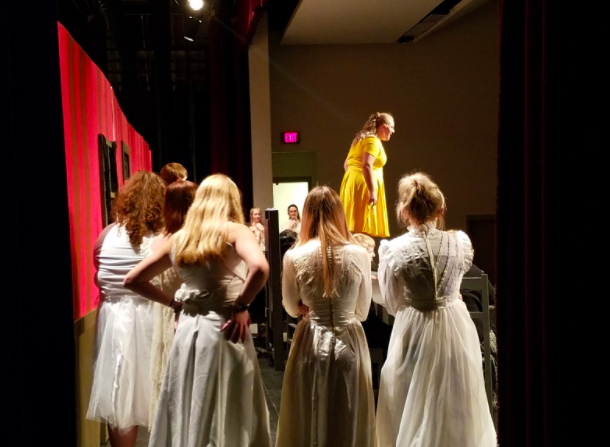 Church stands on a table while singing, giving a powerful performance on the stage.

Taking the spotlight as Alice Beineke, senior Camryn Church hopes that people will attend the musical in support of the effort the cast had put into it. “It’s a really funny show and there’s been a lot of work put into it, especially with the set.” She also believes that while everyone has preferences with what they watch, The Addam’s Family musical “satisfies a little bit of everything.” Church is excited to see the “show come together” and feels happy when she sees a friend nail a role or scene that they’ve been practicing.

Her favorite role in the musical is Lurch, who’s played by junior Hunter Weppler. “He’s like the zombie butler,” Church said when describing the character, enjoying the part near the end where he “sheds his skin” and becomes more open. Meanwhile, the scene “Full Disclosure” is one of her favorites from the musical “because of how chaotic it is. I think it represents the musical really well.”

Church enjoys her role as Alice due to how crazy the character is. “I think the role fits me really well because I’m kind of crazy.” She also enjoys seeing what can be messed around with. Song-wise, Church loves the song “Secrets” as sung between Alice and Morticia due to its catchy tone and insight into Alice’s personality. “It’s one of those songs that stays in your head.”