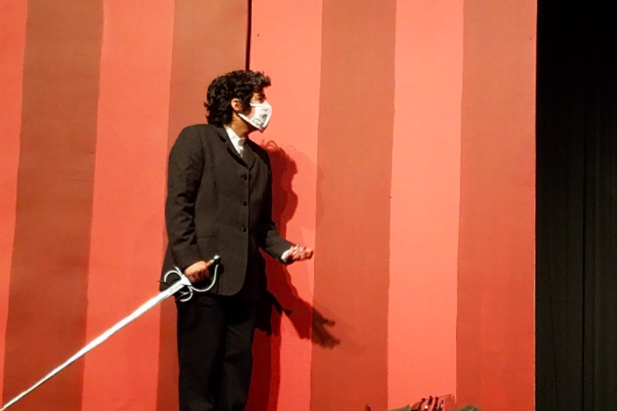 Junior Nolan Perez acts as Gomez Addams in the musical. For this scene he was talking to his wife Morticia Addams, played by senior Genevieve Martinez.

Junior Nolan Perez, playing Gomez Addams in the musical, believes that “it would mean a great deal if people came to support us.” He said that watching the performing arts can help distract people’s minds from anything that may be stressing them out, while still offering a fun time. “The entire cast, including the pit, crew, and directors, have been working extremely hard and pouring our love and energy into this production,” Perez said.

Taking a leading role in the musical is an achievement Perez is fondly proud of. “The performance arts has been my main interest in high school and to have a lead role in this musical means a lot to me,” said Perez. He enjoys the Gomez character due to the fact that it’s “very eccentric, fun, and has a lot of musical numbers.” Perez’s favorite song that his character sings is “Not Today” due to its “over-dramatic” atmosphere and how challenging it is to sing. Outside of that, he recommends “Death is Just Around the Corner” due to its catchy tone, ‘kick line,’ and how well it is sung. “What’s not to love?”