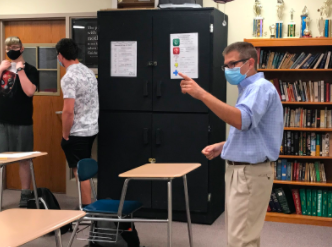 Brandon Baggett moved to Iowa six years ago from Tampa, Florida because of his grandparents. He was “tired of the big city.” Baggett said it’s “been great with smaller communities. It’s closer, more of a community.” Baggett attended school at the University of South Florida and Morningside.

His biggest inspiration is his mom, who was a single mother during his life. She worked nights while finishing school to get her master’s degree, but never quit. “I’m most excited about teaching what I love, which is literature, drama, and debate,” Baggett said.

“One piece of advice, it’s never too late to do the right thing,” Baggett said. Besides teaching, he also enjoys playing Dungeons and Dragons. Baguette said he is “probably the most positive person you will ever meet.”