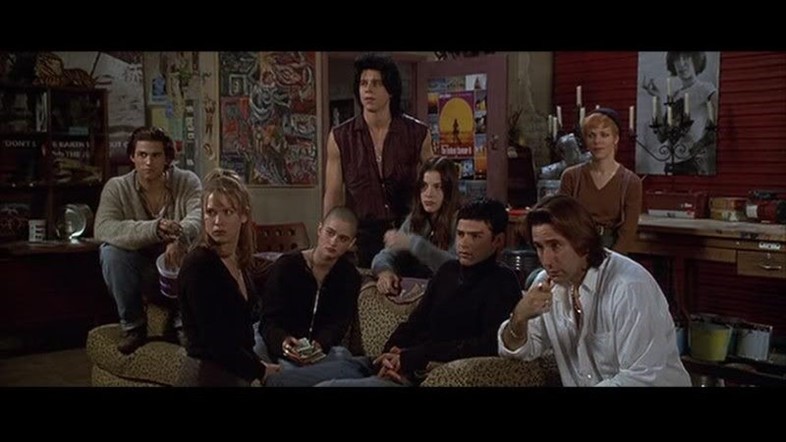 The ’90s were full of crop tops and computers. It was the decade of classic sitcoms such as “FRIENDS,” “Seinfeld,” and “Fresh Prince of Bel Air.” It was also the decade of hip hop, my mom’s personal favorite genre (although she rarely ever listens to it). Although, hip hop had rode to fame in the 1980s, it became a more popular genre in the 1990s. I’m not that into hip hop so there probably won’t be very many hip hop tracks on here but enjoy.

“Good Riddance (Time of Your Life)” was released in 1997 on the album “Nimrod.” It was written by Mike Dirnt, Tré Cool, and Billie Joe Armstrong. This song is about a breakup with a girl who moved to Ecuador. It was named “Good Riddance” to express Armstrong’s anger about the situation that had occurred.

This probably the second Green Day song I had listened to, the first being “American Idiot.” It was incredibly different from “American Idiot,” as I’m sure most of you reading this know. This song is one of my favorite ballads and I don’t really understand why it’s played at so many weddings but I’ll roll with it.

Listen to “Good Riddance (Time of Your Life)” here.

“Wonderwall” was released in 1995 on the album “(What’s the Story) Morning Glory?.” It was written by Noel Gallagher and was supposedly about his then-girlfriend Meg Matthews. Later, after Gallagher and Matthews divorced in 2001, he said it was about an imaginary friend who will come and “save you from yourself.”

I chose this song because it’s the second most iconic song by Oasis (first being “Champagne Supernova”). The only reason “Champagne Supernova” isn’t on this list is, “Wonderwall” was featured in a Netflix show that I enjoy watching (but haven’t finished yet) called “Everything Sucks!” and it’s about growing up in the ‘90s.

“Black Hole Sun” was released in 1994 on the album “Superunknown.” It’s a sad song with a happy melody which ends up making people think the song is happy. It wasn’t exactly about one specific thing but it also wasn’t exactly about something broad either. It’s about the in between that you can’t really put your finger on but you can still somehow resonate with what the lyrics are saying.

This song hit #1 in the U.S. Mainstream Rock chart and #2 on the Modern rock chart. I enjoy listening to this song and while I’m writing this, and listening to “Black Hole Sun,” it makes me think I should try listening to more Soundgarden.

7. “More Than Words” by Extreme

“More Than Words” was released in 1991 on the album “Pornograffiti.” This song was written as a kind of warning that the words “I love you” were becoming meaningless. While the band was recording the song, the producers wanted them to add a killer guitar solo, and drums to back it. The band refused to do it.

I will listen to this song on repeat because I think it’s so good. I mean, I have to be in a certain mood in order to listen to it but I could listen to it all day on those days.

Listen to “More Than Words” here.

Yes, I know in the introduction I said there probably wouldn’t be any hip hop, but I’m going to be totally honest here. I kind of forgot the Beastie Boys existed at the time I had written it but now I do, so here we are. It’s a good song and the music video is cool to watch.

“Mr. Jones” was released in 1993 on the album “August And Everything After.” It was written by David Bryson and Adam Duritz. Duritz said that this song is about him and his friend not having the guts to talk to women at a bar.

I chose this song because it’s really good and I hear it on the radio a lot. It’s a fun song and I love the fact that there’s a white guy with dreads.

“Buddy Holly” was released in 1994 on the album “Weezer (The Blue Album).” It was actually released on September 7, which would have been Buddy Holly’s 58th birthday. It was on Billboard’s Top 500 Songs of All Time.

I chose this song because it’s a good song, as all of the songs on this list are. It was the first Weezer song I had ever listened to, and we also play it for pep band which is pretty fun.

“Smells Like Teen Spirit” was released in 1991 on the album “Nevermind.” It was probably the number 1 hit of the 90s. When writing this song, Kurt Cobain said he was “trying to write the ultimate pop song.” He was trying to rip off the Pixies.

I like this song and I think it’s really good, but it is definitely not my favorite 90s song. It may be Billboards #9 song of all time, but it’s not my number one song. All you Nirvana fans out there, I apologize if this is offensive.

2. “Under the Bridge” by Red Hot Chili Peppers

“Under the Bridge” was released in 1991 on the album “Blood Sugar Sex Magik.” This song was originally written as a poem by Anthony Kiedis. It’s about how he felt isolated by his recent sobriety from the rest of the band and his depression from losing a good friend due to a heroin overdose. It’s about how he feels like the city of Los Angeles is his only friend, and experiences he had under a bridge.

I chose this song because it’s really good. It’s another song that I have pretty personal reasons for choosing this song but it’s also just a really good song in general.

Listen to “Under the Bridge” here.

“I Want It That Way” by Backstreet Boys

“My Name Is” by Eminem

“Mama Said Knock You Out” by LL Cool J

“Losing My Religion” by R.E.M.

“Scar Tissue” was released in 1999 on the album “Californiacation.” It was written by Chad Smith, John Frusciante, Flea, and Anthony Kiedis. There are many interpretations of this song but what I think of when I hear it is someone trying to find their place in the world, and to fix their screwed up mindset on reality. Another interpretation is, when this song was released the band had just lost a member and he was apparently a toxic person. In this song, they could have been talking about how they were rebuilding the band after losing the member.

This song is my number one because it’s pretty cool. My dad says that this song isn’t good enough to make the cut but I have my own personal reasons for choosing this song.

Think of any songs I missed? Let me know in the comments.