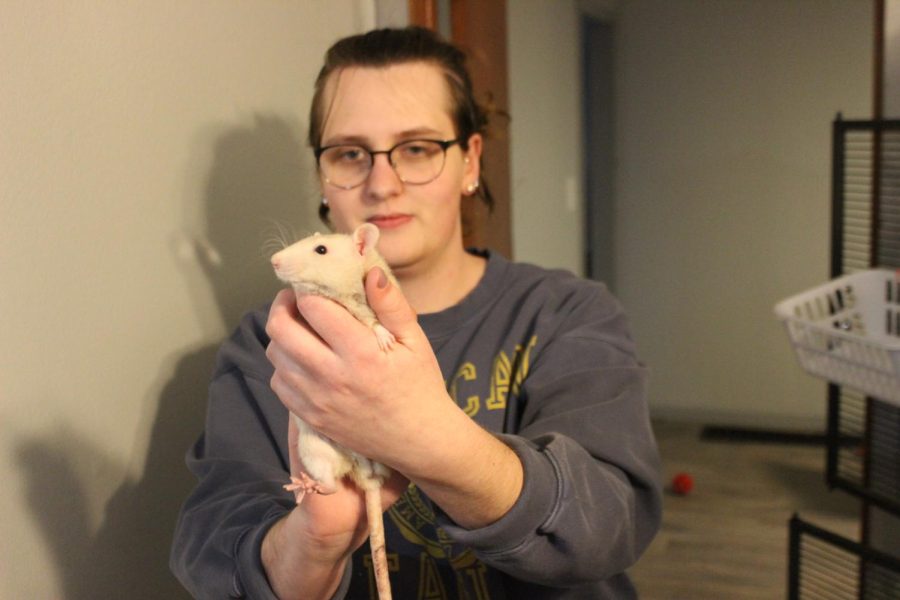 Paisley is one of Herrick's rats, a rex coated rat. She is a hooded apricot.

Rats! One of the most misunderstood animals in the animal kingdom. Many people fear rats and think they are filthy animals when they hear the name, but Atlantic High School art teacher Elizabeth Herrick thinks the exact opposite. For those of you who don’t know, Herrick is the new art teacher. She has had an interest in animals since she was a little girl.

“My curiosity started with my friend who was in science with me,” explained Herrick. “She ended up getting her rat Julia, and Julia was like a science experiment thing, where they had a choice to bring it home or not, and I got a chance to interact with Julia.” Herrick continues, “I was like, ‘I love this,’ and [then] I would always go to pet stores, which isn’t a good thing, and when I went there, that is where I found Penelope.” Penelope was the first rat that Herrick bought and owned. The oldest rat that Herrick owns now is two years old. Her other rats are a year and a half, a year, and a half a year old. Most rats live for two to three years; it’s common for rats to get cancer and respiratory illness. “All rats are born with a respiratory illness that progressively worsens as they age,” said Herrick.

Herrick owns five different “fancy rats” who have unique names. Florence is a Siamese rat, Tallulah is a hairless rat which is known as a “sphynx rat”, Clementine is a rex coat rat, Juniper is a satin coat rat, and Paisley is also a rex coat rat. Herrick often uses the internet when looking for names for her pets. Herrick gets her inspiration for her names from Greek and Roman mythology. Herrick doesn’t just own rats; she also has a dog named Clouse, a parrot named Piper, and a three-legged cat named Stumpy. “It’s an ever-growing zoo, and my fiancé doesn’t slow it down, so chances are it will keep growing.”

Many people have misconceptions about rats that aren’t entirely true. We asked AHS students, “When you think about rats, what comes to mind?” They replied with sewer, diseases, gross, pests, ugly, yuck, big, fat, gray, and bald tails. Besides bald tails, rats are none of these. “They’re clean, they’re social, they’re intelligent, they’re just really great pets,” said Herrick. “Rats are actually one of the cleanest animals you can own. They are similar to a cat on the cleanliness scale,” explains Herrick. “They are very intelligent, so they can learn to play just like a dog. They can play, they like to play, they also like to get tickled, and they squeak at a level that we can not hear.”

Rats do not require very much care, except for the necessities of other pets and making sure they are healthy and providing companionship. You have to have at least two rats; otherwise, they get depressed. Sphynx rats take a little more care, including keeping their skin moisturized, but this can be done with coconut oil. If you want your rat to be friendly and cuddly, it takes more time and attention. Herrick has trained her rats to do tricks for Cheerios. They all have their own personalities. “Some of them are like ‘I’m good, I’ll take treats from you, but I don’t want to be touched like a cat,’ [and] some of them are like my dog who needs a lot of attention. There’s not like a set personality,” said Herrick. Some rats can be bred wrong, which can cause them to be aggressive. Herrick’s rat has only bitten her once, “because I kept poking her.” She said just to put some peroxide and put a Band-Aid on it, but if the rat’s bite goes to the bone, you should go to the doctor to check it out.

To learn more, check out the Washington Post story about having rats as pets to see what other people think. Not only does it discuss how rats are great pets, but it also gives information on what percentage of people own certain types of rats. So next time you see a rat, don’t be too quick to judge. It might become your new best friend.