Vaping has increased amongst high schoolers. 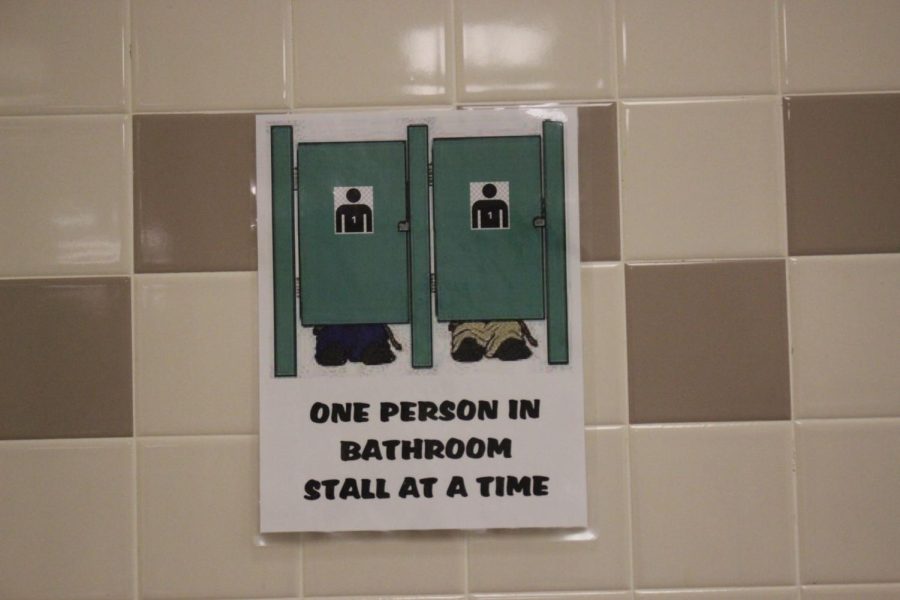 Signs have been put up in the bathrooms to remind students of how many people belong in each stall. There was a rising issue with groups of students using the same stall.

From e-cigarettes, vapes, to JUULS, ways of smoking have evolved along with modern times. With the regulation of being the age 21, or older, to purchase said items, it’s a wonder how many young teens have connections to be able to have one. Why are teens turning towards vaping as one of their resources, and what is causing them to do so?

Sometime in the middle of February 2022, fliers were hung up in Atlantic High School restrooms, reading; “One person in a bathroom stall at a time.” A rise of concern rose among the school’s staff with the problem of multiple students occupying one restroom stall. It had gotten to a point where multiple staff members were seen supervising each restroom on campus. Some students can account for arriving at the restroom and catching sight of a small group of friends hanging inside the handicapped stall.  With the ongoing rise of vaping incidents, a question being asked is are there more kids vaping now in high school than when they were in middle school? “I feel like there’s a similar amount, but on different levels. In middle school, I feel like kids kept their vaping lowkey. Whereas now, kids are more open with it,” said a student.

A law was raised on December 20, 2019, in which the federal minimum age to purchase any tobacco product is 21 years of age. Meaning it is prohibited to sell, give or supply tobacco products, alternative nicotine products, or cigarettes to anyone under the minimum age. The companies that create these sleek, high-tech designs come out with flavors tasting many different fruity and minty scents, making it easy for kids to pass off the smell as something other than their vapes. “E-cigarettes deliver nicotine through a liquid that is heated into vapor and inhaled, cutting out the cancer-causing tar of combustible cigarettes,” said Kate Zernik, a correspondent for The New York Times. “But vaping liquids contain additives such as propylene glycol and glycerol…Diacetyl, a chemical used to flavor some vape juice, has been linked to so-called popcorn lung, the scarring, and obstruction of the lungs’ smallest airways.” she continued.

“I use it to cope, I guess,” said a user. “Like I use it when I’m anxious or when things happen.” They explained that when things get rough, it’s what they turn to. “I vape because it’s always been there with me. Even when people walk away, it’s still there with me.” The user described that they continue to vape because they know how to control themselves and that they can always stop anytime they want. The implication of that statement showed that because they know they can prevent themselves from gaining an addiction, they always come back to the habit of vaping. The people around them also seem to play a key aspect. “My sister started doing it and all my friends did it so I just got into the habit of being around it.”

Although these devices have been created as a safer alternative to cigarettes that would help current smokers quit, it has quickly become spread among middle and high schoolers. Instead of helping current smokers quit, it has the youth hooked on nicotine, increasing the potential amount of smokers. Studies have shown that in 2019, during the rise of vaping, 27.5% of high school students and 10.5% of middle school students were current e-cigarette users, compared to the percent of adults, which is only 3.2%.