A spiritual lifestyle turns into a TikTok trend. 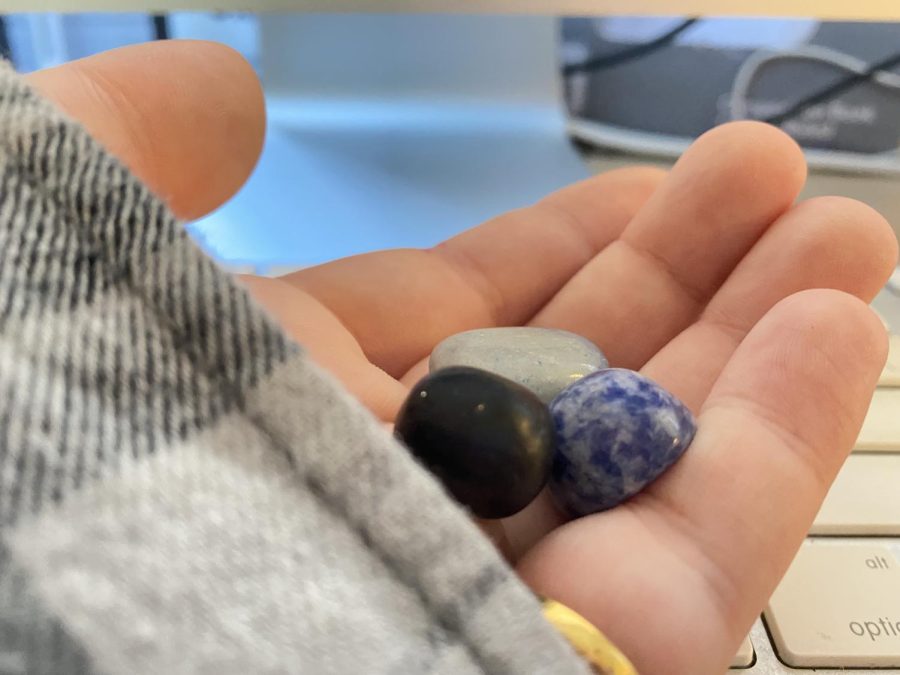 Senior Taliya James shows off the crystals she kept in her pocket. James has been using crystals since the beginning of her senior year.

Healing crystals are the latest therapeutic trend with shops popping up on social media platforms. Some believe that these colorful gems provide their own unique function, such as healing, strength, and relaxation. Celebrities like Katy Perry, Kate Hudson, and Adele have been using these crystals for their various aspects of good luck. Even the students of AHS have been picking up on this fad, but for some students, it’s more than a trend.

The origins of crystals and their healing methods can date back to Ancient Egyptian rituals, traditional Chinese medicinal practices, and even early Mexican burial customs. However, crystals are most commonly found in the Hindu religion and are used primarily in India. Crystals are now being made popular everywhere due to TikTok. While some students are happy to hop on the ‘bandwagon’ of crystal meditation, others have a higher spiritual connection with the gems.

An unnamed student said that healing crystals can help people get more in touch with themselves spiritually, but she wishes more people would learn about healing crystals instead of using them just because they are trendy. “I think a lot of people see spirituality as an aesthetic, rather than a genuine practice. I don’t really like that because it kind of takes away from the importance of the practice.” The anonymous source said that there is a more complex process to these crystals than most people realize. “I keep my crystals in a bowl with each other and Himalayan salt with a selenite tower in the center to charge them, and on nights of a full moon, I’ll set them in the moonlight to allow them to charge then as well,” she said. An incense cleansing also takes place when the student “feels [the crystals’] energies are low,” as well as after the crystals are worn to “ensure they don’t have any foreign or negative energies.”

The same source likes to accessorize with her crystals. “I usually wear them around my neck or I choose a few that I feel I may need for the day and stick them in my pocket.” Although she does not wear crystals every day, she always tries to choose which crystals she feels will boost her mood the most, but some people do not understand why she does it. “Crystals are not really for everybody, a lot of people think it’s a stupid practice, but it’s really like any other religion or belief; most people rely on a God of some sort, spirituality and its practices are the same thing, just relying on the universe and the human spirit.”

Some of her favorite crystals include opalite, which improves communication, promotes positivity, and boosts moods, and sodalite (third eye chakra) which is known to encourage rational thinking, calm the mind and boost intuition. There are seven different types of chakras, and they are described as a ‘wheel’ inside the body that encourages positivity and optimism.

Junior Domanic Mullins wishes other people, and even himself had more interest in crystals. Although he does not currently own any healing crystals yet, his favorite is rose quartz. “They cleanse your energy. They work,” he said. Fellow Junior Claire Wiederstein has also been using this “energy-based system of healing.” Her favorite healing crystal is also rose quartz because “it looks pretty” and “it has different aspects like self-love.” She wishes more people would take crystals more seriously. “A lot of people think it’s a waste of money,” she said. Wiederstein recharges them in the full moon as well as using incense to cleanse them. She meditates with them and takes them with her if she “has a bad feeling about something.” She said doing research on crystals could help people understand their benefits.

While crystals are still not the most popular spiritual practice, the number of people using them is growing each day, especially in small schools like AHS.