Students wonder if a bowling team could be in store for AHS. 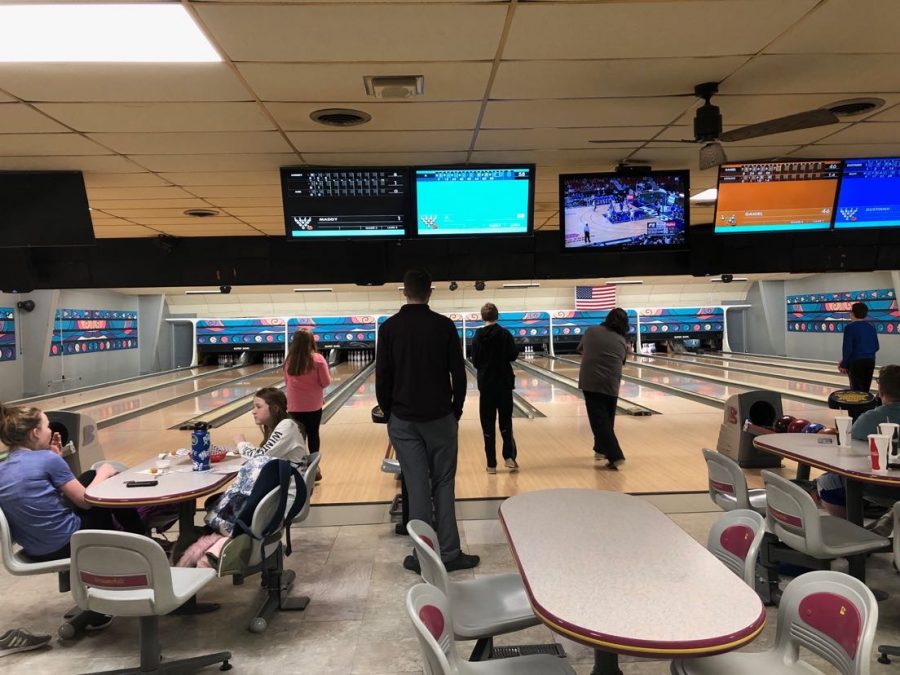 Nearly every school in the Hawkeye 10 conference has a high school bowling team. While the Atlantic Middle School has one, coached by seventh-grade science teacher Michael Applegate, the high school is left without a competitive bowling organization, and some students would like to change that.

Applegate said he would love to see a bowling team at the high school, as well as all other schools in the district, and would be willing to coach. “In college, I specifically became endorsed for coaching because I planned to be a bowling coach,” he said, expressing his desire to many others about becoming one. “I think that AHS is missing a great opportunity for a bowling program. A very large majority of high schools in Iowa have a bowling program. When I first moved to Atlantic, I was surprised that we didn’t have a team,” Applegate said. He and Super Bowl owner Dan Duskin agreed that a bowling organization is great for kids.

The middle school crew competed with many other schools in the area. Parents have to pay a one-time fee for the bowling season which includes a shirt, bowling money for 1-2 practices per week, bowling shoe rentals, and the cost for competing in other locations. “[Duskin] was very generous with the price when you take into account how many games of bowling they get to do over the course of the six-week season.” Bowlers have the option of getting their own bowling balls and shoes but it is not necessary for the middle school program.

Applegate said there are “a lot of positive things about being a part of a team,” and a high school bowling team would promote the teamwork aspect of the sport. He also said it was an inclusive sport that anyone can do. “This would be an opportunity for any student to be a part of something,” Applegate said.

Bowling scholarships can be beneficial to students. There are many four-year colleges across the country that offer scholarships to be on their athletic bowling teams. William Penn University, Iowa Western CC, Iowa Central CC, Morningside, St. Ambrose, Grandview, and Mount Mercy are examples from Applegate of schools in Iowa that offer these scholarships.

A former bowler, Atlantic High School’s Vice Principal and Athletics Director Andrew Mitchell says that he has been approached a couple of times about a bowling team since working at the school. “We had coaching positions cut because of lack of money, to add another sport would be costly,” he said. There are many steps that it takes to add a sport, and Mitchell said there has to be enough developed interest in the sport. “It’s a lot more money than [people] realize, the money that we currently have is already spread out among the sports.” Mitchell said Atlantic has to take into consideration the price of transportation, locations and the cost of hiring a coach. “[Bowling] teaches you discipline, it gives kids up and moving still and it might reach kids who aren’t out for anything,” he said.

Junior Christine Thomas was in the AMS bowling league and said if AHS had one, she would join. “I feel like this will get a lot more kids out for sports, including myself.” She said she felt sad at the end of eighth grade because she knew that would be the last time she competed as a bowler. “It was a great experience for me,” she said. Her fellow classmate Gracie Flinn said she too, would join a bowling team if AHS had one.

Glenwood High School’s Athletic Director Jeff Bissen said that Glenwood had a non-competitive bowling club for two years. “[The students] fundraised money and paid for their bowling at the bowling alley on their own.” He said their bowling club had 11 members and was sponsored by a staff associate. This could be an option for the high school to fund a bowling league in the future.

Other schools in our area that have a bowling team include; Lewis Central, Thomas Jefferson, Abraham Lincoln, St. Albert, Creston, Denison, Red Oak, Clarinda, Tri-Center, Harlan, and Shenandoah. Maybe one day Atlantic will be added to the list.