Can the district buy happiness? 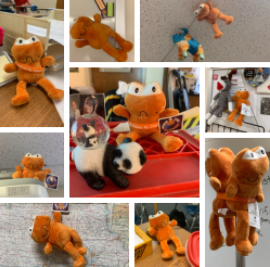 Many Orange Frog stuffed animals are found around the school, displayed in many ways.

Curious students want to know: What’s up with the orange frogs?

The Orange Frog Happiness Advantage is a program recently purchased by the Atlantic Community School District. So far the program has cost the district $32,937.53. ACSD finance director Sarah Sheeder said the initial cost was $10,000, with $15,000 in training. The district also paid $5,920.30 for transportation to training. The orange frogs and wristbands were purchased for $2,017.23.

According to board president Jenny Williams, Orange Frog is a positivity program based on the book “Happiness Advantage” by Shawn Achor. Achor wrote a book about Harvard students burning out because they weren’t at the top of their class anymore. He studied students who were doing better and found they looked at life like their glasses were “half full.” This inspired Achor’s book “The Orange Frog: A Parable about Positive Psychology.”

In the book, four tadpoles are born. Spark, one of the tadpoles, has an orange speck on him which gets him banished to a pond. Spark notices every time he helps someone or feels joy, he turns more orange. Spark has to decide if he wants to “spread joy” and be happy (and orange) or be like everyone else in the crowd, and be joyless. Thus was created the Orange Frog Program.

The program came to Williams’s attention five years ago at a convention where a western Dubuque school talked about how they implemented Orange Frog. According to Willams, the Dubuque district saw test scores improve, staff retention goes up, and “joy being spread.” She thought this was a great idea.

Williams researched the program and then presented it to superintendent Steve Barber and the school board.

School Board Member, Nick Hunt said, “One of the purposes of Orange Frog is to improve the culture in the school district and just having a positive attitude among staff and hopefully that will bleed off to students, parents, and everyone.” He said the program works off the idea that “If you’re happy, you’re positive, optimistic, kind to everyone, it produces benefits and counteracts a negative attitude.”

Hunt said good things happen when people have a good attitude. “When you are optimistic and it’s part of being kind to other people…the benefits of that are accrued from being pleasant, nice, and positive.”

Hunt said he has seen improvements in attitudes since the program began. “When you’re starting to change attitudes, culture, it takes time and slow victories but it’s a trend that we want to start on. It’s not one thing that’s gonna start happening, it’s several little things.”

Senior Katy Rothfusz said that she’s seen the posters, frogs, and the other objects but she doesn’t understand what it exactly is. She also said a couple of teachers have mentioned it but don’t have a full understanding either. “I haven’t seen any changes in other students since many don’t know what it is. I think that spreading awareness is good but it’s not enough.”

Mollie Gill and Hudson Goff have a small understanding of the program. “The District can’t buy our happiness but if they would reach out to more students about it then more people would be positive,” Gill said. She also mentioned people have their off-days but you should always spread positivity. “Little comments can always uplift people. Even if they said something in an assembly or over the intercom, students would know something better.”

Freshman, Josie Handlos said when she was at volleyball practice, people came in and started giving out stuffed animals, necklaces, and bracelets. Although she doesn’t understand the meaning of the Orange Frog program, she has a stuffed animal at home.

Staff has some understanding of the Orange Frog Program from training. The district held its initial training at Atlantic High School for approximately 50 district employees, including administration, food service workers, custodians, and teachers. “If we’re going to do this, we want everyone involved,” Williams said.

The main goal for ACSD is to “spread joy and choose happiness by celebrating successes, creating a positive environment and showing the ACSD community that what they do and think matters,” Williams said. This first year is just a “test run.”

James Todd, the new chemistry and physics teacher said, “I think that it (Orange Frog) would be a beneficial way to address some of the negativity.” Todd has been trying to ensure that his students have a positive mindset and have an “integrated group ethic” in his classroom. “I would need more information to effectively incorporate Orange Frog.”

Dexter Dodson thinks Orange Frog is a good idea because if we haven’t acted on the negative behavior at ACSD schools we would stay stagnate. “As long as we’re trying to improve I think it’s going to be a step in the right direction.” he hasn’t done anything specifically to include Orange Frog in the classroom, but his mindset has changed to “choose happiness and stay positive.” Dodson hasn’t seen any changes in the student body yet. He hopes when the staff knows more information and acts on it, they hope it will become “infectious and spread around the school.”

Williams plans on implementing it in classrooms and using staff to spread constant joy throughout the school year. She also hopes to have a conversation with students about joy through the mindset of Orange Frog. She also said the program lasts as long as we want it to. If it goes well this year, then we will implement it more in the future.