AHS Adjusts to Influx of Eighth-Graders

As the new school year begins, the high school building makes room for the new addition to the halls. 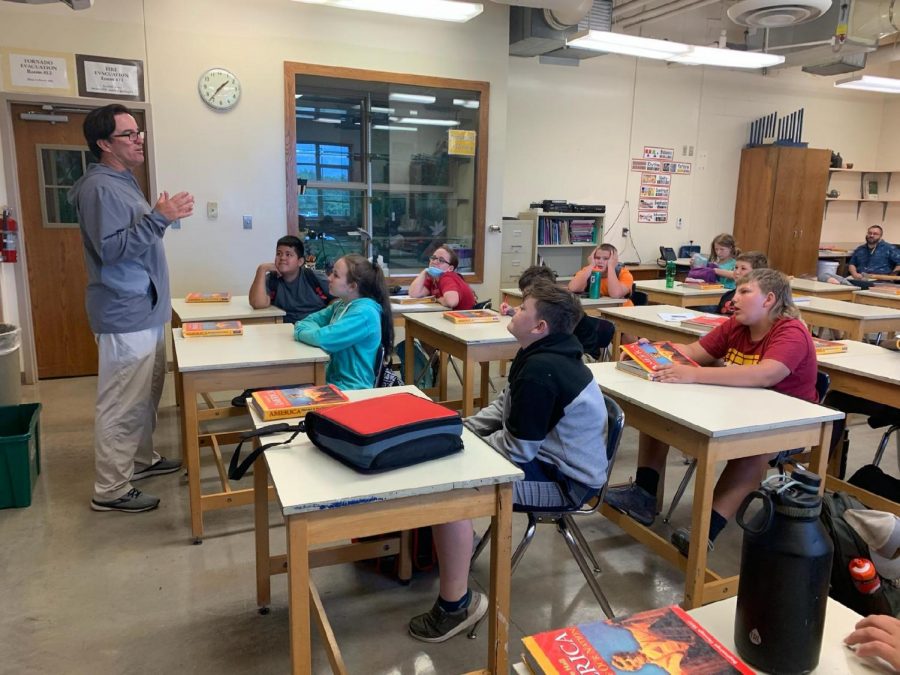 The Atlantic Fire Department and Cass County EMS were dispatched to the Atlantic Middle School after a fire broke out on Tuesday, July 27, at around 12:30 p.m. While the damage from the fire itself was minimal, extreme water damage ended up costing the school a year’s worth of repair time just before the new school year was supposed to begin. This left the people of Atlantic with one question: where were the middle schoolers supposed to learn?

According to We Are Iowa News, 330 students and 50 staff members needed to move somewhere else to continue teaching and learning. The kids at the EOC building in Atlantic were moved to Iowa Western Community College to make room for the sixth and seventh-graders, while the eighth-graders were moved to the high school. This meant placing an additional class of students into the high school.

With limited space in the building, the eighth-graders are using empty classrooms, auditorium pods and the media center as classrooms. The art class is being used as a classroom as there is no art class this year. To avoid conflict, the high school students have a different lunchtime than the temporary middle schoolers.

Eighth-grader Maggie McCurdy said the experience of being in the building a year earlier will better prepare her for high school because she “will already know the layout.” She said the sudden change has caused the middle school’s daily schedule to become more “go with the flow” as the overall agenda has become more fluid. “It was quite a quick change, so I never got a real grasp of what was happening.” McCurdy said, “it’s nice to be able to have another year of preparation.”

Her fellow classmate, Jace McIntyre, said he “never found it very stressful,” about the building change between the schools. He said the experience has been pretty fun for him. He said he enjoys being a part of the high school. “I definitely won’t miss the stairs,” he said. McIntyre said he “won’t miss the ‘up-down-left-right’” style of the middle school. He agreed that being in the building has “definitely” been preparing him for high school.

The building is said to be fixed by July 2022, a year after the initial accident happened. Although the change was sudden, the Atlantic High School has welcomed the eighth-graders with open arms.