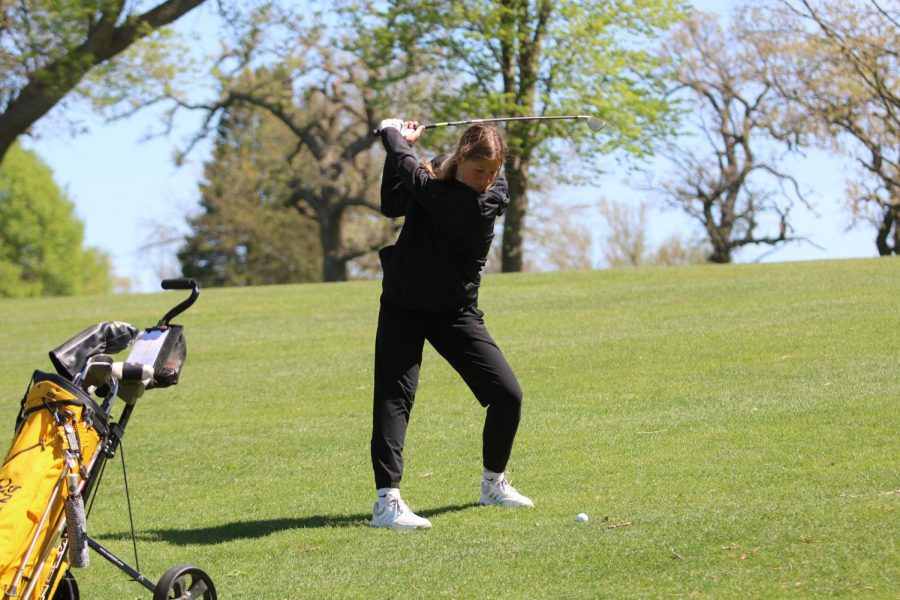 Sophomore Abby Smith preps for a swing at a home meet. A large portion of the girls golf team consists of underclassmen who didn't have the opportunity to play last season.

Starting off the season in April, the Atlantic girls golf team has teed off a number of matches. As the end of the school year approaches, they have only a handful of matches left until the final tournaments and conferences leading up to state qualifications.

Head girls coach Kathy Hobson said this season the girls have been working on becoming comfortable working with different clubs, skill sets, and course conditions. “The more one can play the better off they will be in developing the skills to successfully complete a round of golf,” Hobson said. Most of the players on the girls’ team are underclassmen, so with the lack of a season last year, most of them had not played competitively yet. With the season split into thirds, they’ll be competing at conferences in duals, triangulars, or quadrangulars. This is followed by another tournament in preparation for the conference tournament, then leading to a state-qualifying event.

Hobson would like the girls to “go out on the course and play the best we can as individuals in order to be the best team we can be.” One of the main goals as the season dies down is state qualification. “Ultimately, we’d like for Atlantic to be represented at state by an individual or as a team,” she said.

Hook said the season has had its “ups and downs,” however, “Overall we’ve been doing pretty good.” She said the underclassmen have improved a lot as a whole, but something the team wishes to improve on is reducing the amount of out-of-bounds balls during matches. For lifelong golf player Hook, her senior year goals including doing well at conferences, regionals, and state both individually and as a team. “By the end of the season, I think we’ll advance in something.”