More Than a Class, Best of Show

Artwork, for Bella Peterson, is an escape. 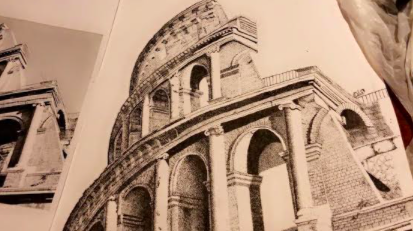 The Roman Coliseum catches the attention of many at a previous Hawkeye-10 Art Show. Senior Isabellah Peterson's stippling is one of her many award-winning pieces of artwork.

In the beginning, she was interested in the art of anime, and her middle school dream was to produce illustrations for Manga. She hoped that hard work would allow her to become big in that field. She was “ambitious, but ignored the other aspects” of the career.

Senior Isabellah Peterson has always enjoyed art. Her father was an adamant artist and encouraged her to take after his practices. However, she only started taking art classes seriously in sixth grade when her friend Shayla Luke presented some of her work to her. “I was awestruck by it and started taking art seriously and turning into a bigger hobby of mine,” Petersen said.

Petersen truly started to get noticed when she submitted a piece during sophomore year. It was a stippling piece of the Roman Coliseum that took roughly 28 hours to complete. To this day, it is still her favorite piece. That piece received a lot of attention at the Hawkeye 10 Art Show. Every piece she put into that show received an award. On top of the Roman Coliseum piece she submitted a drawing of her grandmother and a watercolor piece of a Christmas bow.

The Art Educators of Iowa is a nonprofit organization that promotes visual arts education. They work hand in hand with the National Art Education Association and the Iowa Alliance for Art Education. They focus on awarding the top high school artists and art programs.

This year, Peterson submitted a piece into the AEI’s competition and was awarded the best overall out of the entire competition. The entire opportunity feels very “surreal that it was the best of the entire show.” She is extremely proud of herself for the award.

Peterson hopes to continue with art in her future. Although it will not be her full time career, she plans to be a freelance artist as a side hobby. She knows that continuing art will be a part of her life, even though her future income will not rely on it.