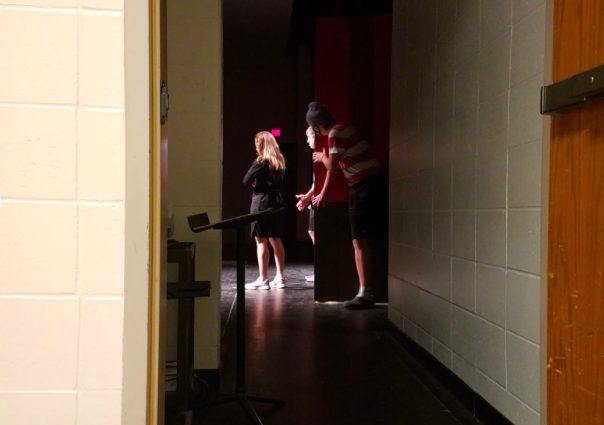 Pugsly eavesdrops on a conversation between Wednesday and Lucas.

Pugsly, played by senior Henry McCalla, encourages students and parents to come to the musical event. “People should come because we often don’t get a ton of student turnout and everybody misses out on all the fun,” said McCalla. He’s most excited for the scene involving a “spinning torture wheel.”

McCalla’s favourite part about practice is “hanging out with people that I have common interests with.” Despite the difference in stature for his played character and his actual physique, McCalla said, “Somehow, I make it work.”

“Pulled” is one of his favourite songs due to his ability to “interject Wednesday’s singing with my screaming.” His other favorite, “What If”, contrasts his first choice which is the reason he enjoys it. To find out why he’s screaming, go and see the musical.