Many students face life changes throughout their days at AHS. 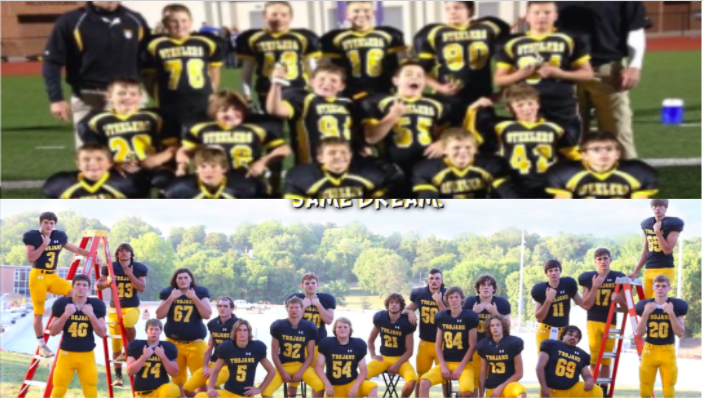 The senior football players face changes each day like other students at AHS. The Trojans have had many changes since they were Steelers.

Who are you? Is a question that ponders the minds of students walking through the hallways. Most teenagers are still figuring out who they are, as well as who their friends are, and what they’re going to do with their lives. It can be a difficult time. So how can you push through the rough patches in high school and just have fun? It all starts with a positive mindset.

According to The Atlantic, psychologists call the state of transition “liminality,” which is “being betwixt and between social roles and/or identities.” Life changes typically happen every 12 to 18 months. Even good life changes can make life become questionable in the decisions you make. Is there any way to prevent this?

You can try to transition in the best way possible, but change affects every person differently. Life changes can be stressful, depressing, as well as traumatic. Senior Kynzie Steffens has experienced many life changes throughout high school. “My sophomore year was super hard on me because I lost a few friends I thought I’d have forever,” Steffens said.  She felt alone and was depressed.  According to Teen Vogue , “relationships are learning experiences. The individuals within them rightfully grow, shift, and evolve over the course of the friendship.”

Steffens understands now that some people aren’t going to be with her forever, and that it’s okay. “Sometimes you go through high school and you grow and experience new things with different people,” Steffens said. The advice she would give to others is, “Even if you think it’s never going to get better, it always will, and it’ll work itself out.”

Junior Kadin Stutzman has faced many physical changes in high school. “I’ve grown three inches, gained 30 pounds, and grew a mustache in the last 3 years,” Stutzman said. He got better at sports and became “stronger and faster.” “If I knew my body was going to change this much, I would’ve eaten better and gotten more sleep a long time ago,” Stutzman said.  Advice Stutzman would give to underclassmen is “you’re not getting heavy, your body is just naturally getting bigger.”

Senior Garrett Reynolds has been through major health changes in high school.  According to Mayo Clinic, type one diabetes is a chronic condition caused by the pancreas producing only little or no insulin.  “During my freshman year I was diagnosed with diabetes which affected my life majorly,” Reynolds said. Reynolds had to start waking up early to check his blood sugar, take shots, and “all that fun jazz.”

Reynolds said he would tell others that coping with his diabetes “gets easier as time goes by.”

That could be said about life changes in general.