The Atlantic speech team had a strong showing at Districts on Saturday, Feb. 29. 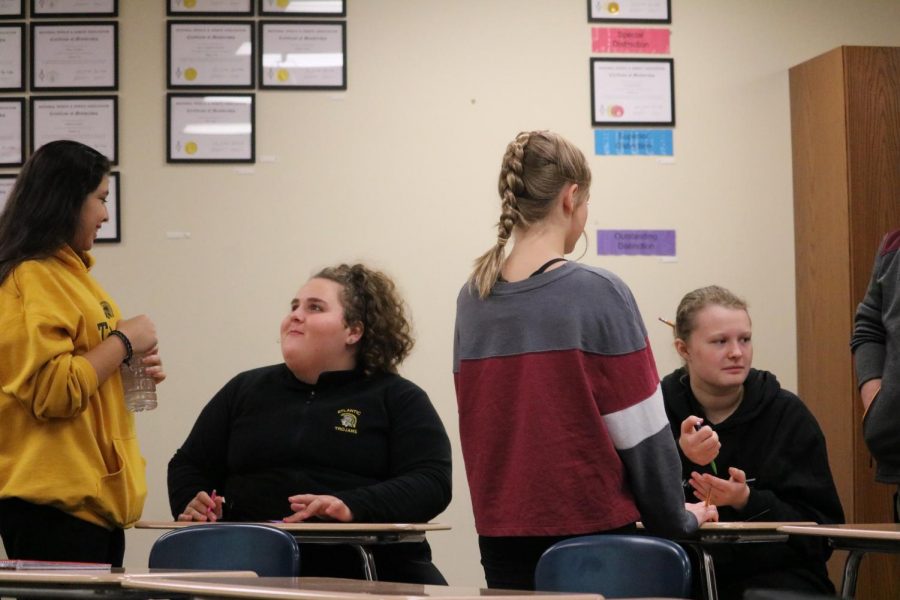 A group of freshmen work together during Drama class. Speech coach Alex Bales teaches the course.

Twenty-one events will be back in action on Saturday, March 14 at the individual IHSSA State speech contest. As a member of the Southwest District, Atlantic will head to Abraham Lincoln High School in Council Bluffs to compete.

In order to make it to State, contestants must first compete at the District level. If the contestant receives a I rating from their judge, they advance to State. The process mirrors the IHSSA Large Group contest, which took place earlier in the year.

One way Large Group and Individual speech differ from one another is in the events offered. While acting and musical theatre are both events that students can enter in both contests, there are many different categories in Individual speech. Prose, poetry, and original oratory are examples of this. Speech coach Trisha Niceswanger said, “Individuals have more categories where they can use a script. There is a mix of memorized pieces and scripted pieces.” Participants can also write and trim their selected pieces. “It’s fun to see kids put their own spin on it,” Niceswanger said.

The District speech contest was held on Saturday, Feb. 29 at Thomas Jefferson High School in Council Bluffs. Atlantic took 29 events, and 21 earned a I rating.

Niceswanger said this was one of the “higher years” of involvement for the Atlantic forensics team. “It is great to see the interest and that we had people double-entered,” Niceswanger said. The team had nine individuals who were involved in two events–which is the most a single person can enter at a contest. Freshmen Charlotte Saluk, Kami Steffens, and Aiden Sanny, sophomore Xander Moore, juniors Troy Roach, Genevieve Martinez, and Lane Muell, and seniors Zach McKay and Bradley Dennis all entered in two events at Districts.

This was L. Muell’s second year participating in Individual speech. In the past, he has competed in the following categories: humorous interpretation, informative speaking, poetry, and storytelling. This year, L. Muell competed in the improv and public address categories. “I thought the improv went better than it did,” L. Muell said. “I was not at all confident in my public address, but I made it to State.” L. Muell selected Ronald Reagan’s Challenger speech to recite in the public address category. He will get it to perform once more at State this weekend.

According to Niceswanger, speech can teach participants all sorts of things. The most obvious one is an improvement in public speaking skills. “It puts structure in your speech, rather than rambling,” Niceswanger said. However, being involved in speech can expose kids to new things. “It can expose them to different topics they may never have researched. Even an acting piece could get them interested in something,” she said.

Muell’s favorite part about being a member of Atlantic forensics is meeting kids from other schools. He said it always makes for an interesting time.

Atlantic’s 21 events will be performed on Saturday for a shot at an All-State bid.