Boys Basketball Comes to a Close

The team lost in the first round of postseason play in overtime. 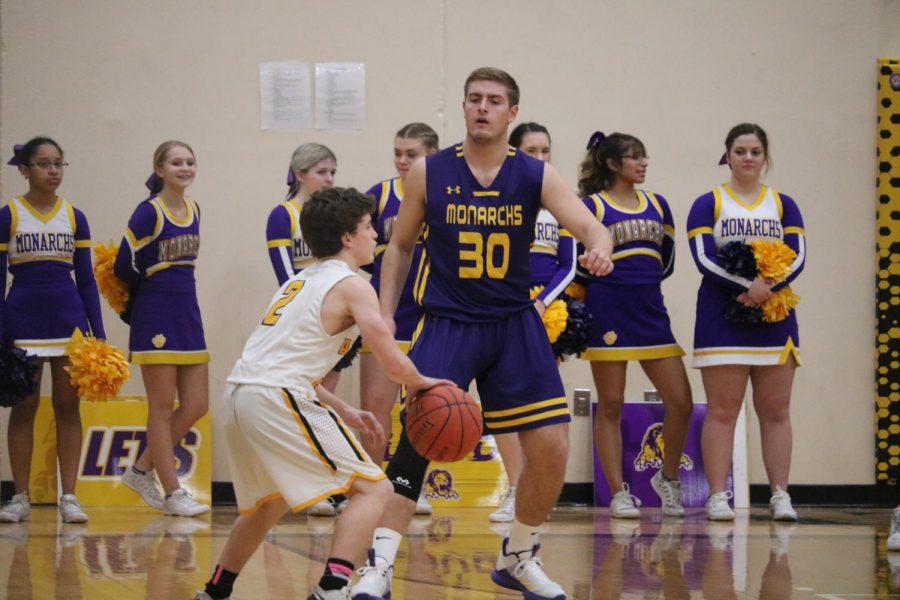 Junior Grant Sturm scopes out the floor for an open teammate. Sturm ended the season with an average of 7.5 points and 3.4 rebounds per game.

The Atlantic boys basketball team wrapped up their regular season on Thursday, Feb. 20 and began the postseason on Monday, Feb. 24.

In their final regular-season game, Atlantic went on the road to take on the Denison-Schleswig Monarchs. At game time, the Trojans were 8-12 and the Monarchs were 12-8. In their previous meeting, the Trojans came up short 67-55 at home.

Denison-Schleswig started the game quickly, putting up 18 points and holding Atlantic to just four. The Trojans struggled to get the ball through the hoop in the second frame, and the Monarchs had the lead at the half, 40-13.

Out of the break, Atlantic’s offense improved, and they put up 18 points in the third quarter. The Trojans outscored their opponents in the fourth frame. However, the boys lost to Denison-Schleswig for the second time this year. They closed the regular season with a 71-42 loss.

Against the Monarchs, Handlos led the team with ten points.

The boys played Harlan in Glenwood on Monday. The Cyclones’ record was 15-6 to begin the postseason. The two squads had played each other the two previous Mondays in Hawkeye 10 action. In the first game–played on Monday, Feb. 10–Harlan was victorious, 71-41. The Cyclones also came out on top on Monday, Feb. 17 in Atlantic, 57-40.

Atlantic started the contest with a bang, splashing in 19 points in the opening quarter. The Trojans kept their foot on the gas and were up 26-18 at half.

Harlan mounted their comeback in the early moments of the third quarter. A tough Cyclone defense limited Atlantic to five points, making the score 37-31 going into the final frame. With their season on the line, the Trojans began cutting the deficit slowly throughout the quarter. With just a few seconds left on the clock, a three pointer by Templeton tied the game up and sent it to overtime. Each team had scored 54 points by the end of regulation.

The Cyclones began overtime with a quick field goal. Atlantic quickly answered, with Handlos hitting his sixth three pointer of the game. Moments later, he fouled out on a controversial call that made the gym come to life. At the free throw line, the Harlan player sunk both shots, taking the lead back. With 2:33 to go, Templeton chipped in a quick two pointer, giving Atlantic the advantage, 59-58.

The boys began to waste the clock, hoping to hang on to the lead. After noticing the Trojans’ strategy, Harlan began to play aggressively, forcing Ebling to call a timeout. With 42 seconds left in the game, Harlan made a field goal, securing the lead once more. Hoping to regain possession of the ball, the boys fouled, and the Cyclones’ shots went through the hoop, resulting in Atlantic being down by three.

With 3.3 seconds left, Atlantic attempted to tie the game. However, the boys missed the shot and their season ended in a close, 62-59 overtime loss.

In his final game as a Trojan, Petersen scored nine points and had eight boards. He also had three assists, two steals, and a block against the Cyclones.

Harlan will take on Glenwood in the next round of postseason play.

The Trojans end the season with a record of 8-14. They had victories over Clarinda, Kuemper Catholic, Shenandoah, Red Oak, Saydel, and St. Albert. In conference play, the boys went 4-6, finishing in seventh place.

Throughout the year, Atlantic scored 1,177 points. Handlos led the team in scoring with 332 points this season. Petersen had 222 and Sturm had 164. As a team, Atlantic had 649 boards in their 2019-20 campaign. Petersen was credited with 201 boards, leading the squad. Templeton had 87 and Handlos grabbed 76.