One of AHS' newest teachers has a following in the classroom thanks to his well-known dad jokes. 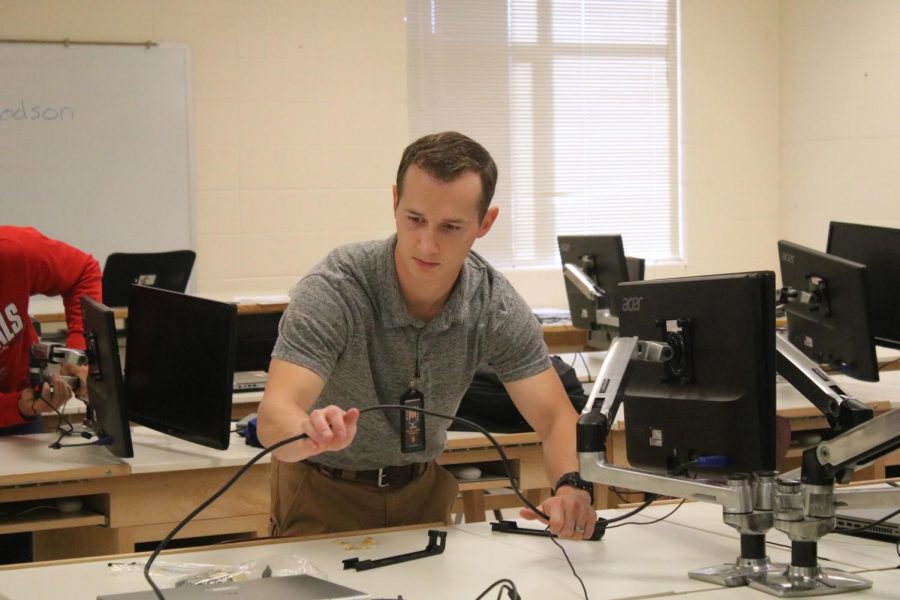 Dexter Dodson has made himself at home in the Industrial Tech wing. Students brighten up when he tells "dad jokes."

Dexter Dodson: the home improvement and dad joke man. Dodson started at AHS in the 2019-20 school year, becoming some students’ favorite teacher because of his fun personality and teaching skills.

Dodson is from Maywood, Neb. In school, Dodson’s favorite classes were shop and band, where he played percussion. After high school, he went to Wayne State University, where he graduated and met his wife, Jill.

Dodson and his wife have been married for six years and have two children, Oliver and Maren. Oliver is three years old and Maren is one year old, causing their family to be on the run. According to Dodson, his parenting style is “soft” and he tries hard to the best dad he can be. The Dodson’s have a dog named Linus. Dodson said he favors dogs over cats.

One interesting fact about Dodson is that he got involved with crossfit training in 2015. He saved his money and bought his own equipment, which is stored in his basement and garage. Dodson enjoys the workout offered by doing crossfit, instead of using it in a competitive way. He said the activity came easy to him, almost like second nature.

By working with power tools on the daily, accidents are something Dodson and his students have to be careful of. Dodson has been involved in shop classes since he was in high school and only has had a few accidents. In college, Dodson was using a nail gun and ended up shooting a nail into his hand because he used it wrong. Dodson said, “Minor injuries are smashed fingers.” Luckily, no serious injuries have occurred in Dodson’s classes. If a student is using a tool wrong, Dodson shows them the correct way in order to prevent an injury.

He has many hopes with his class, mainly that they listen and learn. Dodson’s favorite class is the class where everyone listens, but loves all the classes he teaches. Many students enjoy his classes because his love of dad jokes. According to Dodson, his mind works in “a weird way.” Dodson’s favorite dad joke is “Why did the bicycle fall over? Because it was two tired.” Freshman Ethan Steffens likes the Intro to Trade Design class because he likes the being in the lab and the dad jokes.

If Dodson was an animal he would be albatross, because he wants to be able to fly for long periods of time over the ocean. His favorite quote is “In two days, tomorrow will be yesterday.” The quote shows how time can fly and to make use of it. Dodson’s favorite kind of humor is creative humor with some personality. Dodson would love to keep learning through the years.