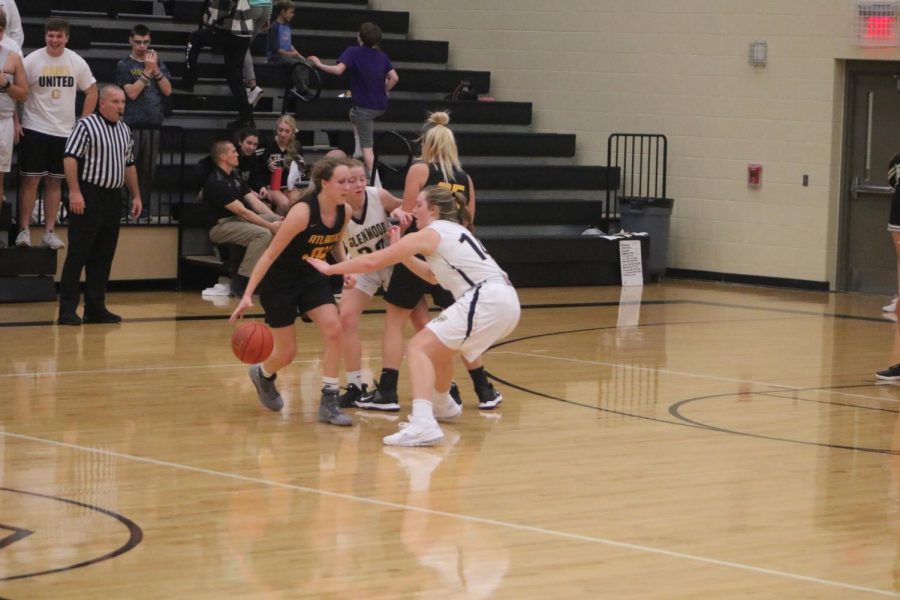 Atlantic girls basketball played the Glenwood Rams on Thursday, Jan. 30 for the second time this season. In their previous meeting, the Rams were victorious at home, 71-45.

On a two-game winning streak, the Trojans played host to the #4 team in Class 4A. Glenwood was a perfect 15-0 upon arrival in Atlantic. The Rams were also leading the Hawkeye 10 title chase.

Before tip-off, the starting lineups were announced. Juniors Maycie Waters, Tessa Grooms, Taylor McCreedy, and Haley Rasmussen, and senior Kenzie Waters got the start for the Trojans.

In the first quarter, the two teams used back-and-forth play to quickly put up points. The Trojans hung with the rated Rams, and were down by four heading into the second. Before halftime, the errors quickly piled up for Atlantic, and Glenwood had secured the lead, 38-18.

The Trojans refreshed their focus after the ten-minute break and splashed in 19 points in the third quarter. However, Glenwood continued to shoot from all spots on the floor, and extended their lead to 25 points. In the final moments, Atlantic scored 13 points, but Glenwood proved too strong, grabbing the win, 80-50.

Rasmussen and K. Waters each had 12 points on Thursday night, and Grooms chipped in ten. The Trojans had a strong night in regards to rebounds, grabbing 36 boards as a team.

Currently, the girls are tied for fourth place in the Hawkeye 10 conference. The other team sitting at 4-3 in conference play is Harlan. Glenwood is the top squad, followed by Red Oak. Lewis Central rounds out the top three.

Next up for the girls basketball team is a rematch against St. Albert on Friday, Jan. 31. Atlantic will look to avenge a 56-48 loss.