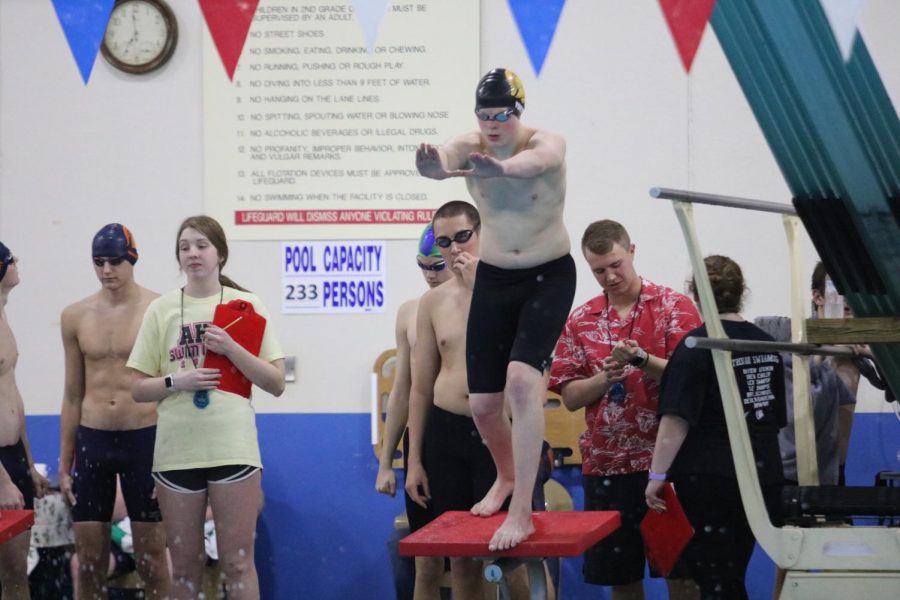 Sophomore Bryan York zones in before jumping off the block. York was a part of four of the top-ten events on Saturday.

The boys swim team competed in the 28th Annual Winter Classic, which was held at Lewis Central on Saturday, Jan. 25. There were 11 teams at the tournament, and the Trojans earned eighth place.

Highlights from the meet include a handful of top ten finishes. Individually, sophomore Bryan York found himself in the top ten in two events. York earned fifth place in the 500-yard freestyle after swimming a 5:21.05. In the 200-yard freestyle, he took eighth place. He swam the event in 2:00.04. Sophomore Drew Engler finished in eighth place in the 100-yard breaststroke, touching the wall in 1:09.84.

The boys also had three relays make the top ten on Saturday. York and Engler teamed up with sophomore Alex Sampson and senior Cole Sampson in the 200-yard freestyle relay. The group of guys earned eighth place with their 1:44.88 completion time. Engler, C. Sampson, and sophomores Brayden Atkinson and Bryce Schmidtke competed in the 200-yard medley relay. Their 2:04.05 time allowed them to take ninth place. The final Trojan relay that clinched a top-ten finish was the 400-yard freestyle relay. York, A. Sampson, C. Sampson, and Atkinson took ninth after swimming a 3:54.34.

This was the last regular-season meet for the Atlantic boys. They will begin their postseason run on Saturday, Feb. 8 at Districts. Johnston is the host school for the State-qualifying meet.