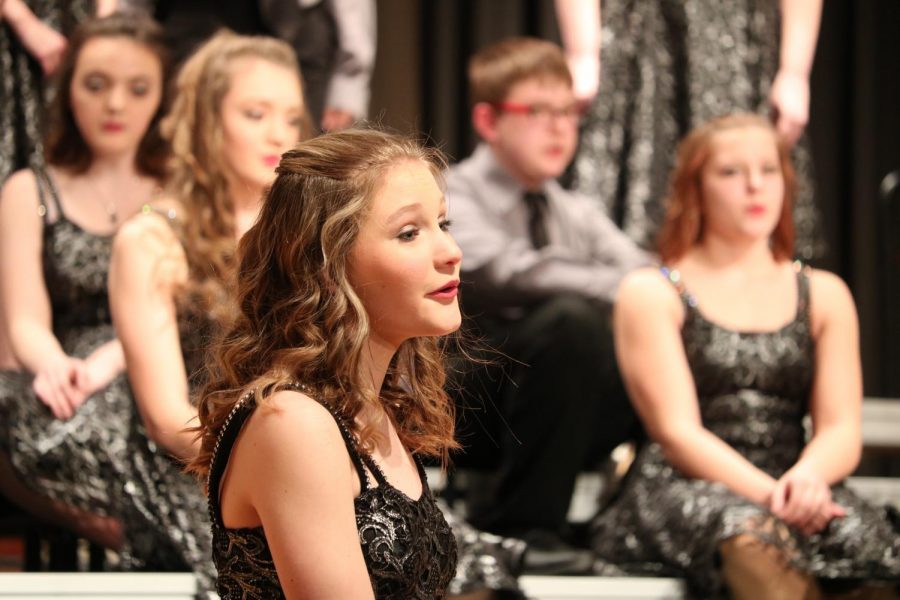 Sophomore Katy Rothfusz sings along to the ballad. Last year, Rothfusz was a part of the Diversity show choir, but this year she is in Premiere.

The Atlantic High School show choirs and jazz band will be performing their annual Swing Inn show on Thursday, Jan. 16 at 7:30 p.m. in the high school auditorium.

The two show choirs will be performing recognizable pieces, like “Don’t Stop Believing” by Journey, “Hey Jude” by the Beatles, and “We Are the Champions” by Queen. The songs are mainly pop, but they all fit into a theme. The Diversity show choir will be singing and dancing their theme of “Music Through the Ages”, with songs originating from ’60s, ’70s, and 2010. The Premiere show choir’s theme is “Believing,” whether it is in oneself or in another aspect.

Diversity has practiced everyday for AO and almost every other day for their second or seventh period class. The Premiere show choir, however, focuses on one aspect of the show daily. One day they will work on choreography, and the next they will work on perfecting the music.

The Jazz band practices every Monday, Wednesday, and Thursday at 6:45 a.m. The band will play right at 7:30 p.m. on Thursday, but that won’t be their only performance. The band will also play on Saturday, Feb. 1 for the state contest, and Monday, Feb. 17 for districts. Sophomore Bindi Page said, “I feel like it’s going to be a very successful season.”

Freshman Katie Birge is very excited to officially open the show choir season. She said Swing Inn “will be very entertaining” and she encourages people to come check out the performance.