Petersen Takes On the Psyche

After a 15-year hiatus, history teacher Trace Petersen is back in the saddle of teaching a psychology course. 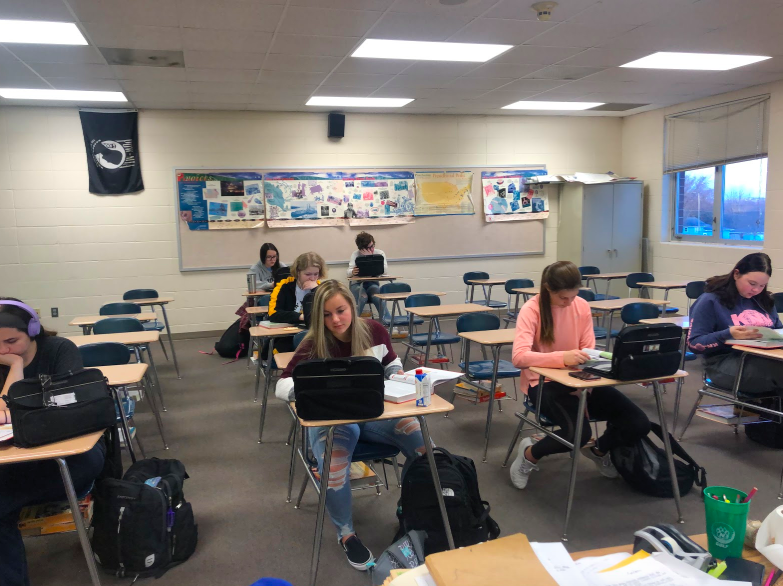 Students study up during Trace Petersen's Behavioral Science class. There are two periods of this course at the high school.

History teacher Trace Petersen has stepped up to the plate and taken on the role of teaching the Behavioral Science course at AHS.

Petersen has taught CPI and American History at Atlantic High School for 15 years. Before that, he taught psychology for 16 years at other schools in cities such as Panorama, Iowa, Washington, Iowa, and King City, Mo. Former history and psychology teacher Tony Wiley resigned in 2019, leaving a vacancy for the class. “There was an opening when Wiley left, and I had experience teaching in that department so I ended up taking on the class,” Petersen said.

In this class, students learn about themselves, their behavior, why they act the way they do, as well as other cognitive processes. Twelve students are enrolled in the first hour class, and 15 take the course the following period. As much as he loves teaching, having two periods of Behavioral Science is enough to get Petersen to turn on the coffee pot. Petersen jokingly said he gets the “full effect of coffee.”

Behavioral Science is one semester and counts as a history credit. Students have the choice of taking Behavioral Science after their first semester of sophomore year. In the class, students learn about chemical imbalances in the brain as well as how it affects people’s mental health.

“If I was to start all over again, I would be a children’s psychologist,” Petersen said. He enjoys teaching students about the human mind and how it functions.