The Atlantic boys were back in action on Tuesday, Jan. 7 at the Nishna Valley YMCA. 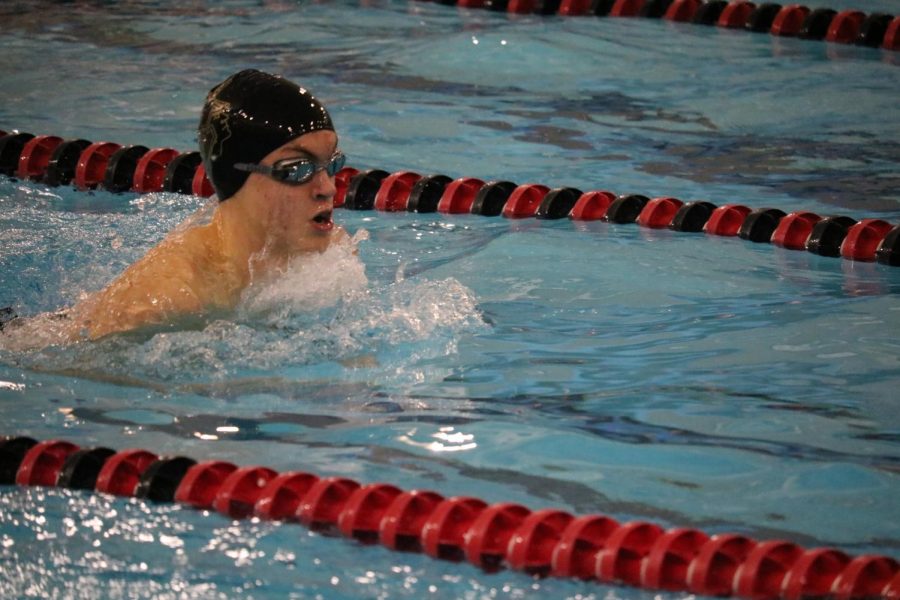 Sophomore Drew Engler cuts through the water during his event. Engler took fourth place in the 100-yard breaststroke.

In their first competition of the new year, the Atlantic boys swim team hosted Waukee and Sioux City West on Tuesday, Jan. 7. The boys knew the competition was going to be tough, much like what they are expecting to see at the start of the postseason.

Highlights from Tuesday’s meet include a runner-up finish from sophomore Bryan York in the 500-yard freestyle. York churned out a time of 5:15.35.

Other Trojan events finished in the top five. In the 100-yard breaststroke, it was sophomore Drew Engler in fourth place, after he swam a 1:08.10. Sophomore Brayden Atkinson earned fourth place in the 200-yard freestyle. His time was 2:02.20. In the 200-yard individual medley, York snagged fourth place, touching the wall in 2:16.62.

Junior Devlyne Sunderman had a solid showing in the 50-yard freestyle, taking fifth. He swam the event in 34.50. Atkinson rounded out the top five in the 100-yard freestyle with a time of 55.13. Senior Cole Sampson was the final Trojan to earn a top-five individual placing on Tuesday night, taking fifth in the 100-yard backstroke. C. Sampson got it done with a 1:07.46.

Next up for the swim team is a home dual against Council Bluffs Abraham Lincoln. The Trojans will take on the Lynx on Thursday, Jan. 16.