Trojans go 1-2 over the holidays. 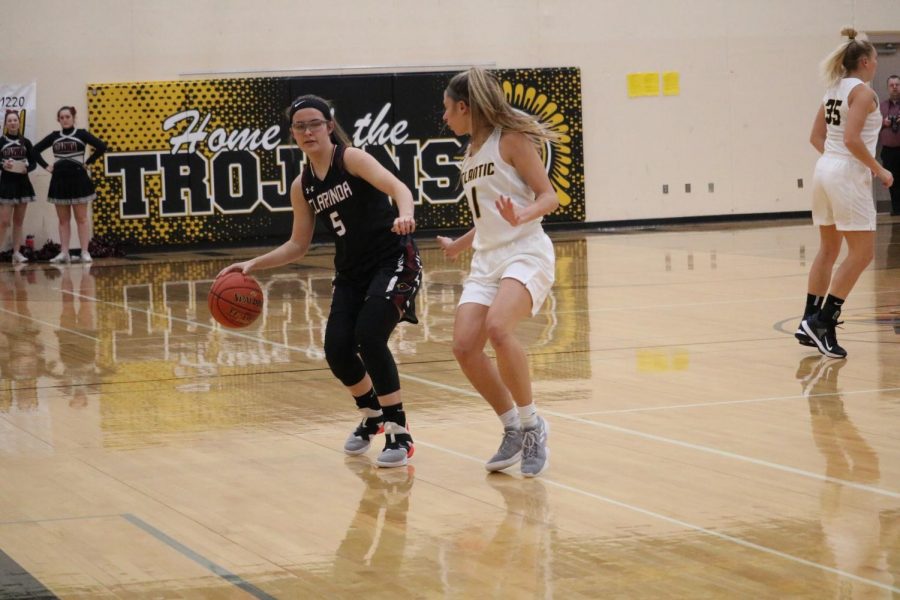 Junior Haley Rasmussen guards her girl in a game earlier this season. Rasmussen has played varsity basketball since her freshman year.

While many students were kicking back and relaxing over the two-week hiatus from school, the Atlantic girls basketball team kept up their pace with practices, workouts, and competitions. The Trojans took on Lewis Central, Shenandoah, and St. Albert in the last few weeks.

On Friday, Dec. 20, Atlantic hosted Lewis Central. The Titans came to town with a record of 3-2, with their two losses coming from Hawkeye 10 teams. Similarly, they were holding down the #9 spot on the IGHSAU’s class 4A rankings. The Trojans were 4-4 following a close loss to Denison-Schleswig the night prior.

The girls played a scrappy game against the Titans. However, Lewis Central’s rebound game ousted the Trojans, 57-40. Junior Haley Rasmussen had 14 points for Atlantic, and senior Kenzie Waters tacked on 11.

In their first game of 2020, Atlantic headed to Shenandoah on Friday, Jan. 3. The Fillies were 1-7. Their lone victory was over the Clarinda Cardinals, a convincing 14-point win. However, Atlantic squashed Clarinda earlier in the season, topping the Cardinals by a 55-point margin.

Though Atlantic faced a diamond and one defense, they had the upper hand in the game. The Trojans shut down the Fillies, 58-35 after a strong defensive showing. K. Waters led the pack with 20 points. Rasmussen also finished in double figures with 17.

The following night, Atlantic hosted St. Albert. The Saintes were 5-3 upon arrival in Atlantic. Both teams were coming off of victories. St. Albert stuck it to Kuemper Catholic the night prior, just as Atlantic had done to Shenandoah.

Atlantic raced out to a 5-0 lead in the first quarter, but found themselves just a bit behind at the half. The girls bounced back and kept it close, but dropped a close one to St. Albert, 56-48. K. Waters totaled 19 points against the Saintes, and Rasmussen chipped in 11.

With school back in session, Atlantic’s record stands at 5-6. The girls will take on Kuemper Catholic on Friday, Jan. 10. The Trojans edged Kuemper Catholic in a contest earlier this season.