Sitting Down with Hunt and McLean 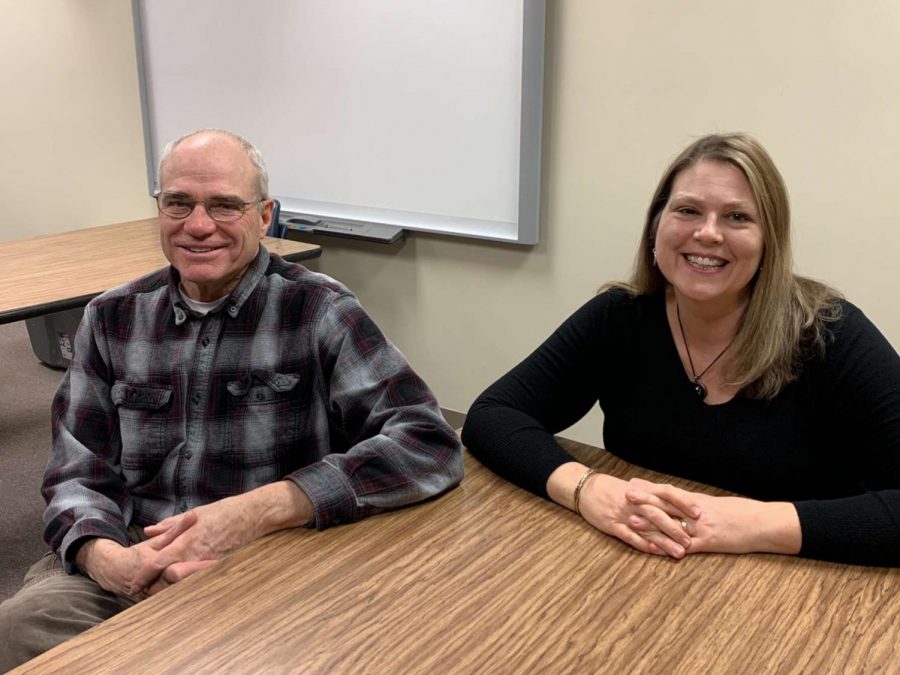 Newly-elected school board members Nick Hunt and Laura McLean smile for the camera. In order to prepare for the tasks of the Board, Hunt went to a leadership camp and McLean attended seminars.

The two new members of the Atlantic School Board are ready to make their marks on the district. Nick Hunt and Laura McLean met with AHSneedle editors on Monday, Dec. 16 to discuss their plans as they take office.

Both board members have a vision for their contribution to the schools: Hunt has specific goals for the district, primarily including the culture. McLean voiced an attitude of watchful support. She brings a concern about students’ mental health to the forefront.

The school board election was held on Tuesday, Nov. 5 and three people were elected. Jenny Williams was re-elected with 690 votes, while Hunt and McLean were elected for their first term with 942 and 589 votes, respectively.

McLean has lived in Atlantic for 11 years and has had three children attend AHS. Although she hasn’t lived in Atlantic as long as Hunt, McLean has been interested in political office since high school. She is passionate about the school board. “We want everybody here to have a great school experience,” McLean said. “We want you guys to have great teachers and great staff. The ones that we have that are great already, we want to encourage them.”

Hunt’s Goals for the District

One of Hunt’s main goals is to improve the culture of our school district and community. “Culture is really about how people work together,” he said.

Hunt wants to improve communication with the community and build trust between the school board and the staff. “Everybody has a different idea of what they mean by culture and that’s okay. But if we start talking about it, maybe we can come to some consensus of what we want the culture to be. And maybe people are just as happy as a lark right now and everything’s hunky-dory and they don’t see any problems. I see problems because people come to me and they talk to me,” Hunt said. “We’re all here in this building whether we like it or not. So how are going to get along? How are we going to work together?”

McLean attended many school board training seminars including one about mental health. “There’s an epidemic of anxiety, depression, mental health issues and we’re not immune to that.” According to McLean, Iowa tends to be relatively low on the amount of mental health interventions needed, but it is all the way at the bottom in terms of how much they give to mental health spending and access to counselors and psychologists.

“There is a lot of stuff about high school that deeply sucks. That is true for everybody,” said McLean. She gave one piece of advice for AHS students: “Hang in there and find the support that you need. There are adults who really do care and if you can identify one adult who cares, that’s okay, go to that person.” McLean recognizes the pressure that high school students have because she went through it as well. “Pressing through those difficulties is what makes us strong.”

“We need to have strong schools to make a strong community,” McLean said. “I think that making our school district the best it can possibly be is actually one of the best ways to benefit Atlantic.”

McLean wants students to know she wants to hear from them and improve communication. “Anyone can come to a board meeting,” she said. “I think it’s great when students are civically-minded and engaged, and I want to encourage that.”