“A Beautiful Day in the Neighborhood” Review

Mr. Rogers gets a reprise in TriStar Pictures' latest flick. 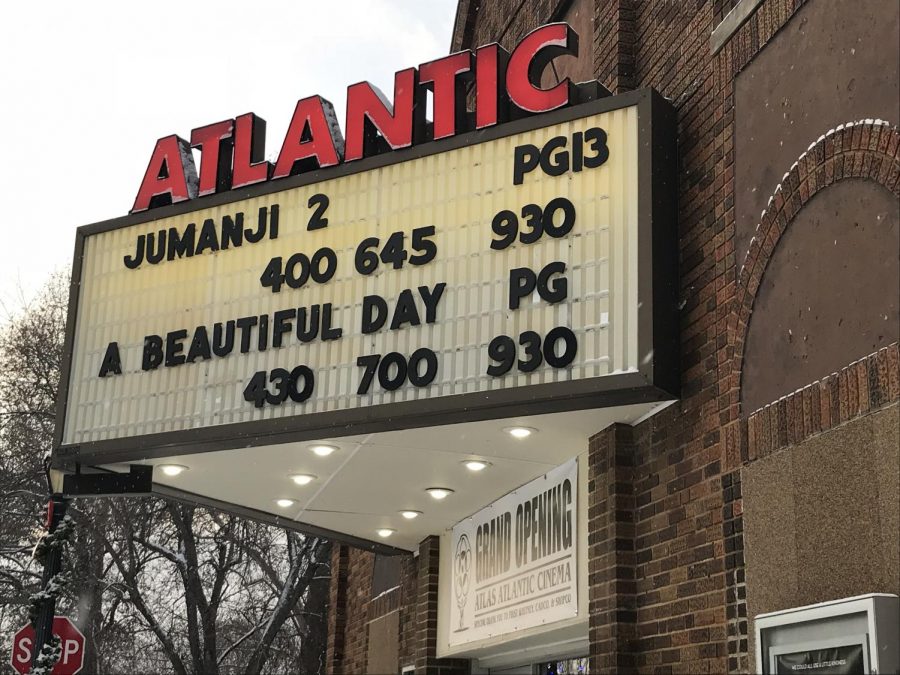 "A Beautiful Day in the Neighborhood" came to the Atlas Atlantic Cinema for one week this December.

“A Beautiful Day in the Neighborhood” tells not the life story of Fred Rogers, famous as the title character on “Mr. Rogers’ Neighborhood.” However, it is influenced by a true event, an article written by Tom Junod for Esquire in 1998. Junod’s article was part of the hero campaign from the magazine, in which American celebrities who made a difference were interviewed and profiled. The interaction between Junod and Rogers is showcased in TriStar Pictures’ Nov. 22 release.

For the film, Junod’s name was changed to Lloyd Vogel, played by Matthew Rhys. Rogers was played by Tom Hanks.

At the beginning of the movie, Vogel, his wife, and baby boy attend his sister’s third wedding. Vogel is not happy his father will be in attendance as he is a drunk and contributed little to his childhood. The pair get into a fight at the wedding, worsening the situation. Shortly after, Vogel’s editor informs him he will be profiling Rogers. As an investigative journalist, he isn’t thrilled to take on a story about one of America’s most wholesome men.

Rogers and Vogel meet up on the set of “Mr. Rogers’ Neighborhood,” where Vogel realizes how caring Rogers is. After they tape an episode, Rogers and Vogel chat for a few minutes, during which Rogers more or less interviews the journalist about his relationship with his father, as he has a black eye from the fight. Vogel feels like he didn’t get the answers he needed from Rogers and jumps on the chance to interview him again when he visits New York City.

After a press event, the duo chat in Rogers’ apartment, where more of the same occurs. Rogers asks Vogel about his feelings towards his father once again, as the older man truly does care and wants the situation to improve. However, Vogel storms out of the apartment.

Vogel returns home to find his father and stepmother getting ready to eat dinner with his wife and son. His father has a heart attack, and they follow him to the hospital. Instead of staying overnight, Vogel catches a bus to Pittsburgh, where Rogers lives, unhappy with how he left things with him.

First things first, here’s what I have to say: Hanks kills it. Period. His acting was spot-on, from his body language to his delivery of lines. At the beginning of the film, an episode of “Mr. Rogers’ Neighborhood” plays, with Hanks acting as Rogers. The way he goes through the introduction is extremely similar to the actual opening of the program.

Whether you’re a fan of Mr. Rogers or not, there are many lessons that can be learned from this film. One occurs in my favorite scene, in which Rogers and Vogel are eating together in a Chinese restaurant. Rogers challenges Vogel to think for one minute about all of the people who love him. All of the patrons in the restaurant do the same, and there is no sound for one excruciatingly long minute. Time has never ticked by so slowly. I loved this scene. I could feel the people around me doing the same thing as the characters on the screen. No one moved a muscle.

“A Beautiful Day in the Neighborhood” shows how easy it is to be nice to others. I think this is an important film in today’s age for that exact reason.