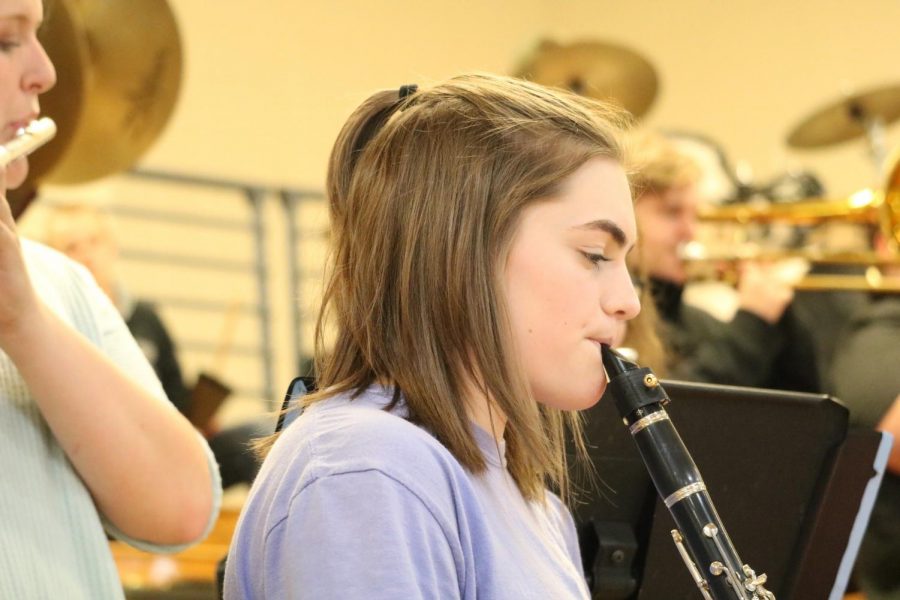 Junior Bri Wilson lets is rip on the clarinet. Wilson purchased a pep band jersey this season with her last name on the back.

What does the “Pride of AHS” do during the winter?

The pep band plays at home basketball games and it’s all the same people as those in concert band, but there are many differences. For instance, at many games, alumni are also allowed to play with the students. The students are taught to sightread the music, so it isn’t practiced very much. The songs are fast-paced, taken from previous marching band seasons.

The pep band sits behind the visitors’ section, and they have specific binders with music for the games. There are many songs on the pep band roster, including fan favorites like “Sweet Caroline” and “Fat Bottomed Girls.” There are also different songs of all varieties, the ones everyone knows. Several new songs were added to the pep band binders this year. “Kung Fu Fighting,” “Radioactive,” and “Believer” were revived from the 2018 marching band season. “Feel It Still,” “Dream On,” and “Sweet Child O’ Mine” were all played as part of the 2019 marching season. All three songs, among others, got a second life in the pep band binders.

According to junior Tessa Grooms, pep band “is a different environment. It’s different than playing in the band room.” Everyone is in one spot, and the energy is high at every game. On multiple occasions, the pep band has challenged the student section to organized cheer battles, in which they challenge who has more spirit and support for the Trojan team.

But while many students have a lot of fun with pep band, not everyone has as much fun. Due to the fact that there is only one trap set, the rest of the percussion is obligated to improv with various other percussion instruments. Because of this, a cowbell or two gets mixed in with the other instruments of pep band.

This year, the group was given the option to purchase a customized shirt to wear to the basketball games. The jerseys were designed by members of the band. Those who purchased a shirt got to choose what they wanted inscribed on the nameplate on the back. Some bandies took it literally, with freshmen Gracie Flinn and Elizabeth Anderson having their last names on their jerseys. However, other students chose less conservatively. Freshman Abbi Richter printed “Corn Fed” on her shirt, sophomore Brayden Atkinson picked “Chad,” junior Anna Wieser selected her nickname, “AWeezy,” and senior Grace Clay can be seen sporting “Drum Major Grace.”

On a Twitter poll, AHS voted “Sweet Caroline” the best pep band song. Neil Diamond’s hit had 60 percent of the vote, followed by “Fat Bottomed Girls” with 26 percent, “Forget You” with eight, and “Handclap” with six.