The Trojans win one, lose one. 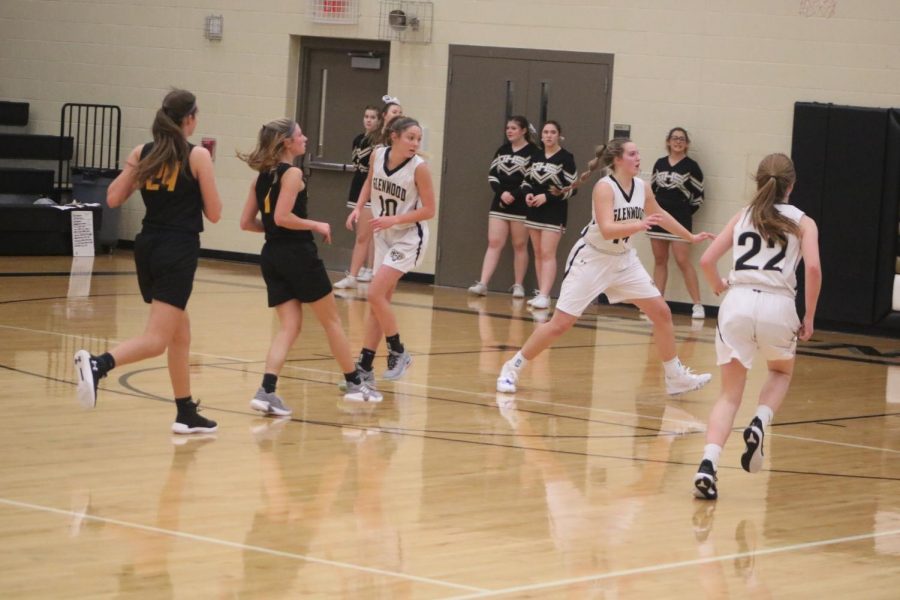 The Trojan girls race down court against the Glenwood Rams on Friday night. Atlantic takes on Glenwood on Thursday, Jan. 30 on the home court.

Atlantic girls basketball had a busy schedule set up for last weekend. On Friday, Dec. 6, the girls headed to Glenwood for a conference matchup with the Rams. The following night, Atlantic hosted a Corner Conference squad, the Griswold Tigers.

On Friday night, Atlantic tipped off against Glenwood, who were ranked #4 in class 4A by the IGHSAU. Upon the arrival of the Trojans, the Rams were 2-0, snagging both their wins over Council Bluffs teams. Atlantic was winless, searching for their first victory.

The Trojans were outscored in all quarters but one, resulting in a 71-45 loss. The outcome of the match showed Atlantic what they need to do to compete in the tough Hawkeye 10 conference.

Junior Taylor McCreedy had a nice night with 11 points, leading the team. Right behind her was junior Haley Rasmussen, who chipped in ten. Defensively, the team had 13 steals.

The girls get another crack at Glenwood on Thursday, Jan. 30 at home.

The following evening, the Trojans returned to the home court against Griswold. Both teams were winless thus far in the season. While Atlantic was coming off the Glenwood game, Griswold’s last match had a 50-point deficit by the time the buzzer sounded. Knowing they might have to fight tooth and nail, Atlantic took the court.

Right from the get-go, the Trojans proved they weren’t messing around. They laid in 22 points in the first eight minutes of the contest, holding the opposition to a measly four. Atlantic didn’t let up, contributing another 16 points in the second quarter. At half, the Trojans were ahead 38-11.

With Atlantic firmly in the lead, coach Dan Vargason subbed in some JV players. The girls continued to outscore Griswold, tapping in 12 points in the third quarter, and nine in the final frame. Another strong aspect of Atlantic’s game was their aggressive defense. They limited the Tigers to single-digit scoring in each quarter.

Atlantic claimed their first game of the season 59-18 on Saturday night.

Against the Tigers, Rasmussen tossed up 23 points. Also in double-digits was senior Kenzie Waters, who knocked in 17. The girls did a solid job of passing around the ball, earning nine assists. Defensively, they had three blocks and an impressive 20 steals.

At the end of the weekend, Atlantic’s record stood at 1-3.