The Trojans came up short against Creston on Tuesday, Dec. 3. 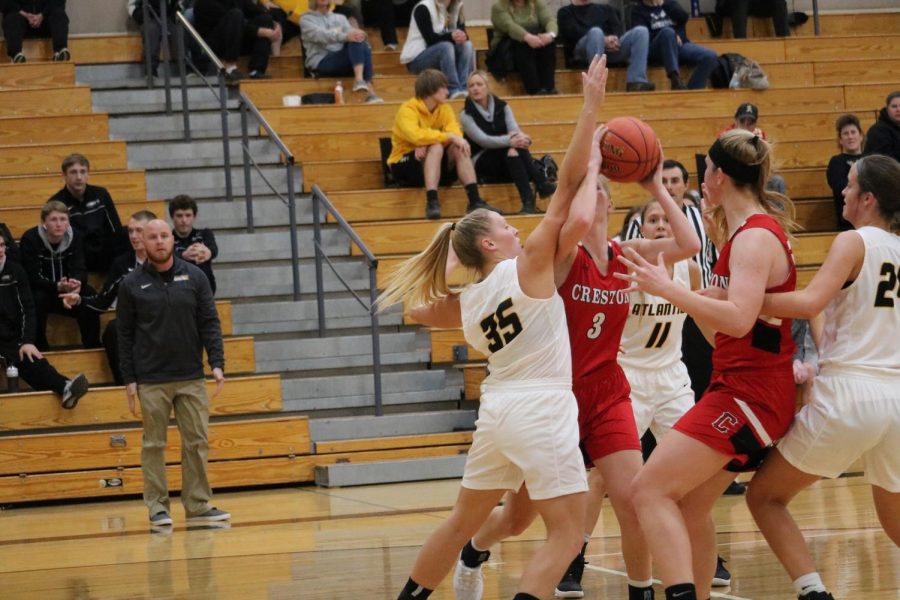 Hawkeye 10 play began for the Atlantic girls basketball team on Tuesday, Dec. 3. The Trojans played host to the Creston Panthers. This was the first home game for Atlantic.

The Trojans were coming off a loss to Bondurant-Farrar, while Creston was riding high after dismantling a Winterset team the night prior. Atlantic’s record was 0-1, while Creston sat even with one win and one loss on the season.

In the opening minutes, Creston put together a quick offense. Atlantic chipped in a couple points, but was down by ten after the first quarter. The girls got comfortable and dug in against the Panthers in the second quarter. Heading into the locker room, the score was 29-14, with Creston in the lead.

While the Trojans were outscored 13 to seven in the third frame, the momentum shifted in their favor. As time ticked away, Atlantic’s defense became more aggressive, forcing the opposition to turn the ball over. Rasmussen found her lucky spot behind the arc–the corner–and cashed in two back-to-back three pointers.

Atlantic outscored Creston in the fourth quarter, but was unable to claim the lead. In their first conference contest of the 2019-20 season, the Trojans lost 55-41.

Leading the Trojan pack was K. Waters, with 17 points. Rasmussen was right behind her with 16. She hit four three pointers in Tuesday night’s game. As a team, Atlantic had ten steals.

Next up for the Trojans is a battle against the #4 team in class 4A–Glenwood. The girls will make the trip on Friday, Dec. 6. The varsity contest begins at 6 p.m.