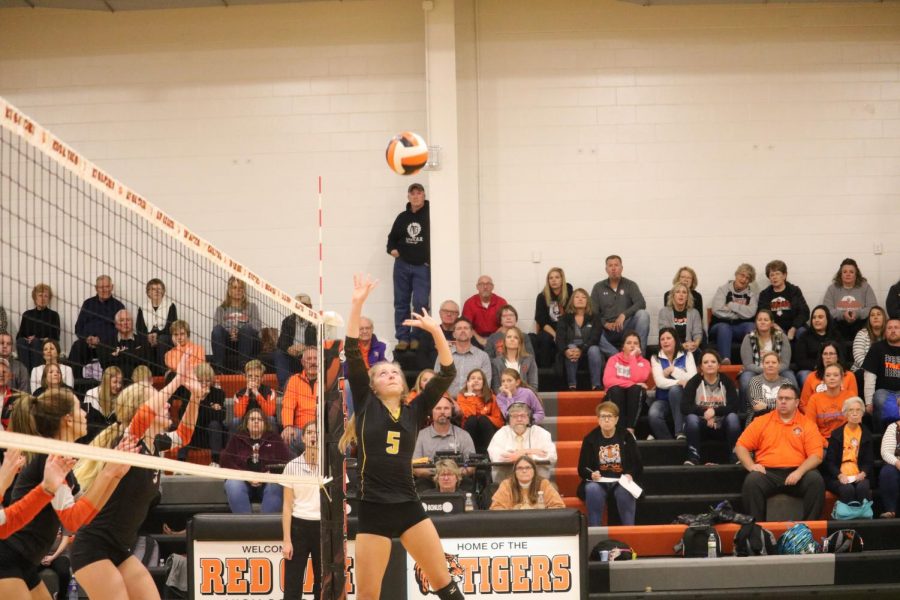 Junior Haley Rasmussen sets the ball in the final match of the season against Red Oak. Rasmussen totaled 580 assists on the season.

In the first round of postseason play, Atlantic was matched up against Red Oak. The Tigers were ranked #3 in class 3A by the Iowa Girls High School Athletic Union. The regional quarterfinal match was played in Red Oak on Wednesday.

The two teams played twice earlier in the season, with Red Oak snatching both matches. However, in the most recent meeting, Atlantic snagged a set from the Tigers, who finished atop the Hawkeye 10 conference standings.

On Wednesday, the Trojans stepped onto the court looking to keep their season alive. Red Oak’s strong hitters made it tough. At the same time, mental mistakes plagued Atlantic throughout the match, resulting in serve-receive errors.

The Tigers would grab each set by the same margin, 25-11. The Trojans watched their season end in straight sets.

Against Red Oak, Atlantic had 14 kills and 45 digs.

The Trojans finished the season 6-36. They had wins over Riverside, Earlham, East Union, CAM, Creston, and Westwood. The win over Creston ended the conference drought for Atlantic. The Trojans hadn’t been victorious over a Hawkeye 10 challenger since 2011.

Junior Alyssa Derby led the squad with 179 kills on the season. She also led the team in aces with 23. Junior setter Haley Rasmussen finished the year with 580 assists. In the last tournament of the 2019 season, Rasmussen surpassed 1,000 career assists. Junior libero Mia Trotter had 467 digs in Atlantic’s 2019 campaign. Finally, freshman Aubrey Guyer put up 69 blocks this season, leading her team at the net.

The team graduates three seniors–Kenzie Waters, Chloe Davis, and Emma Templeton. Each girl has been involved in volleyball all four years of high school.