Atlantic faced off against a variety of teams from around the area last Saturday. 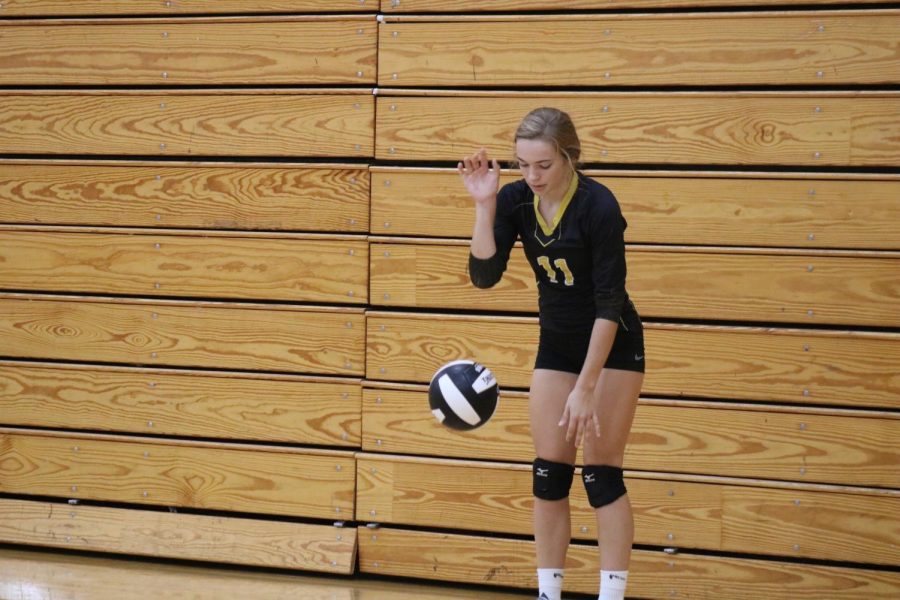 Junior Caroline Pellett prepares to serve the volleyball. On Saturday, Pellett had nine kills and 19 digs.

After a week full of skill work and focus on fundamentals, the Trojan volleyball team took the court on Saturday in their first home contest of the season. Five teams were on the slate at the Trojan Invitational, which was played between the middle school and high school gyms.

Starting at 9 a.m., the girls played a young Treynor team. It all Trojans in the first set, where the creamed the Cardinals, 21-7. In a nail-biting second set, the two teams fought back and forth for the lead. The opposition would force a deciding set after claiming the second, 22-20. Mistakes plagued the Trojans in the final moments of the match, where they lost, 15-7. In the close competition with Treynor, Atlantic had 18 kills, 17 assists, and 30 digs. All of these numbers were higher than the competition’s.

Next up was a brawl with Winterset. The Huskies were ranked #12 in class 4A, and were undefeated upon entry into the tournament. Atlantic pushed the first set to extra points, but came up short, 22-20. The Trojans dug in deep and edged the Huskies in the second, claiming the set, 21-19. In the third and final period, Atlantic dropped another tense match, 15-11. Though the girls didn’t win the game, they went toe-to-toe with a ranked team in the top class, which shows how much potential Atlantic has. Against Winterset, the team had 30 digs. Senior Kenzie Waters led her squad with nine.

In the last match before the lunch break, the Trojans played Glenwood. This was a good chance for Atlantic to measure themselves against a conference opponent who they would see later on in the season. Atlantic lost in straight sets to the Rams, who had solid blocking up front, limiting the Trojans’ offense. On defense, every girl that played in the match against Glenwood got at least one dig on the statsheet, totaling 23.

After lunch, Atlantic competed against Underwood, another ranked team. The Eagles came into the tournament with a 6-2 record, and a #7 ranking in class 2A. In the first set, Atlantic remained close behind the visitors, but were unable to clinch the lead, losing 21-17. The Eagles pulled away in the second, 21-14. Atlantic had 12 kills and four blocks in the loss.

In the final match of the day, Atlantic took on another conference challenger in St. Albert. Last season, the Saintes claimed the top spot in the Hawkeye 10. St. Albert’s offense proved not much had changed, but Atlantic hung with them in the match. The Trojans lost 21-16, 21-15. The girls had five blocks against the Saintes.

St. Albert would go on to win the tournament, beating out every team.

Despite going 0-5 on the day, the Trojans saw how they stacked up against a variety of opponents. Atlantic had 59 kills, 117 digs, and 17 blocks on Saturday through 14 sets.