Two individual state qualifiers are the last to rep the Trojan tennis name. 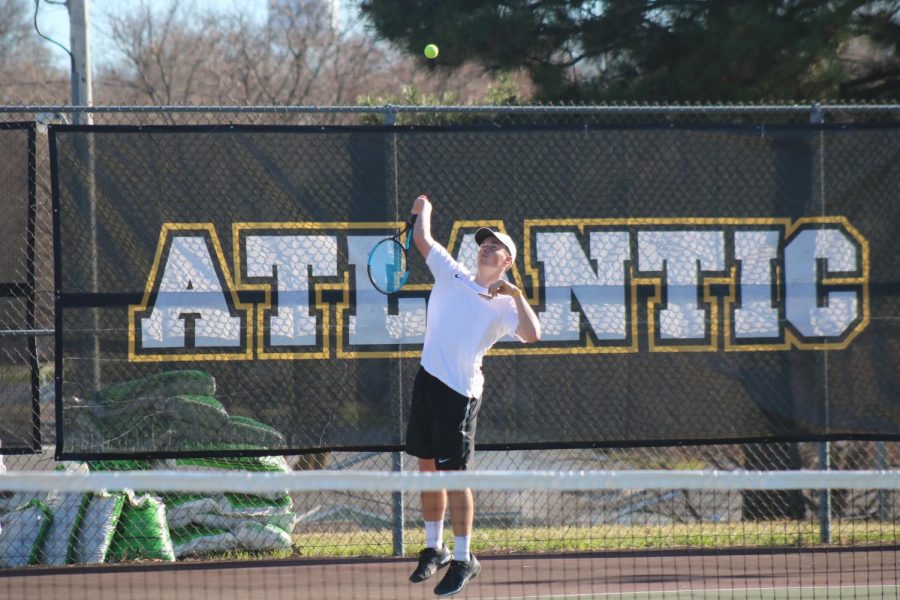 Junior Nile Petersen serves the ball to his opponent. Petersen qualified for state for the second year in a row following a successful day at districts.

District play began shortly after 8 a.m. on Friday for the Atlantic boys’ tennis team. After a successful day on court, the boys challenged Norwalk in a dual for the preliminary sub-state match, in which they fell 1-5, ending their season.

On Friday, the two Trojan doubles teams each won one match. Sophomore Ethan Williams and freshman Ethan Sturm outlasted a Glenwood duo 7-6, 6-0. In the following round, the “Ethan team” put up a fight against the four seed from Red Oak, but came up short 6-3, 6-4.

The junior team of Jesse Reid and Brody O’Brien took it to the other Glenwood team, slamming them 6-0, 6-3. After the win, Reid and O’Brien suited up against the two seed from Clarinda, but lost 6-3, 6-2. With the two wins in the doubles department, Atlantic was guaranteed host honors if they could continue to put up points.

The majority of the team’s success came from the singles division. Junior Nile Petersen–seeded first–blanked his opponents in the first two rounds of the tournament, beating each challenger 6-0, 6-0. In the match to qualify individually for state, Petersen topped Clarinda’s Korey Rogers 6-4, 6-1.

On the bottom-half of the bracket, sophomore Grant Sturm strolled through the first round with a 6-1, 6-2 victory. In the next round, G. Sturm faced the second-seeded Adam Harris of Southwest Valley. G. Sturm lost the first set, 1-6, but battled back in the second from a 1-4 deficit to push the match to a deciding set. G. Sturm sealed the deal 6-4 in the final set for a spot in the semifinals.

In the match to qualify for state, G. Sturm was stacked against yet another seeded player–Clarinda’s JD Hitt. G. Sturm raced to an early lead with a 6-2 win in the first set. However, Hitt came back in the second set, putting together a 6-1 show to force a third and final set. The pair battled back and forth in the final set. Hitt saved four match points, but was unable to top the rookie G. Sturm, who outlasted his opponent 7-5 for a trip to state. G. Sturm’s second-and-third-round matches lasted over two hours each, resulting in a tiring day of tennis.

For the district championship, G. Sturm forfeited to teammate Petersen, as both individuals had punched their ticket to the state tournament.

After all of the points had been totaled, Atlantic earned runner-up honors in the district, falling to Clarinda by one point, the exact same result from the conference meet just a few weeks prior. The Clarinda team received a bye in team-tennis substate play, but Atlantic would then host third-place Norwalk the following morning with the hopes of extending their season.

However, Norwalk proved a tough opponent, as they won five matches to Atlantic’s one. The lone winner for the Trojans was Petersen (#1), who brawled back in the first set following a three-game debt. Petersen won his match 6-4, 6-3.

With the loss in the preliminary sub-state dual, the Atlantic boys’ tennis team ended their season with a record of 6-5, and runner-up honors at the conference meet. Petersen and G. Sturm will represent Atlantic at the state meet on May 24 and 25.