In a close 5-4 decision, Atlantic lost their fourth dual of the season to St. Albert. 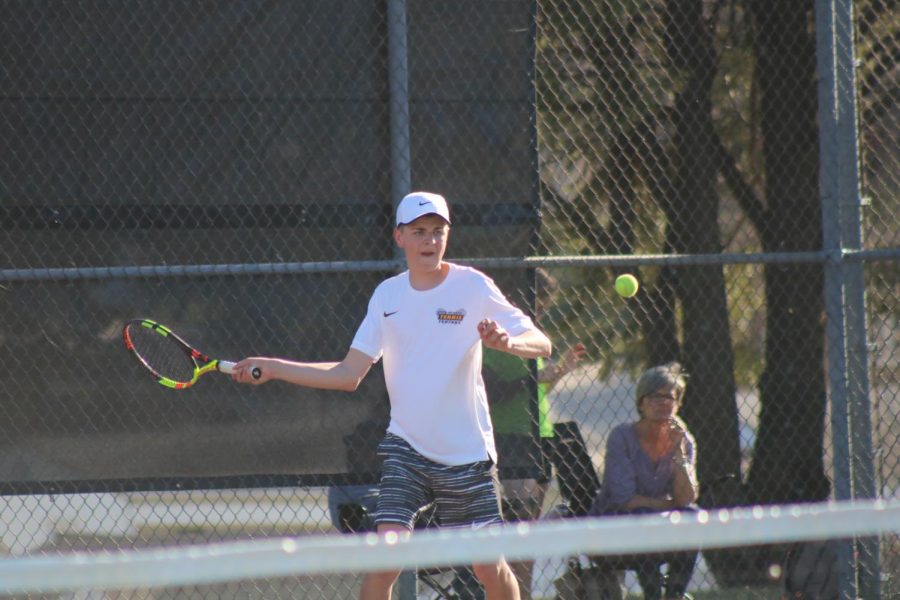 Junior Jesse Reid prepares to hit a forehand to his competitor in the #2 singles match. Reid has played tennis all three years of high school.

The Trojan boys’ tennis team travelled to Omaha to take on conference competitor St. Albert on Thursday. This was Atlantic’s first outing since the conference meet, where they placed 2nd.

In the singles department, the bottom half of the lineup put the Trojans on the board against the Falcons. In his first match at the #4 spot, sophomore Grant Sturm put together a 10-5 win. With the win, he remained undefeated in singles in dual competitions. Sophomore Ethan Williams had a commanding 10-2 win at the #5 spot, and senior Avery Andersen topped his opponent 10-5 from the #6 slot.

Going into doubles, the two teams were even at 3-3. In order to win, the Trojans would need to win at least two of the doubles matches. Williams and freshman Ethan Sturm (#3) dominated in their match, crushing their challengers, 10-1. The top two teams for the Trojans were unable to outplay their opponents, resulting in Atlantic’s fourth dual loss of the season, 5-4.

Up next for the Trojans is districts, which have been moved to Friday due to the weather. Play will start shortly after 8 a.m. here in Atlantic.