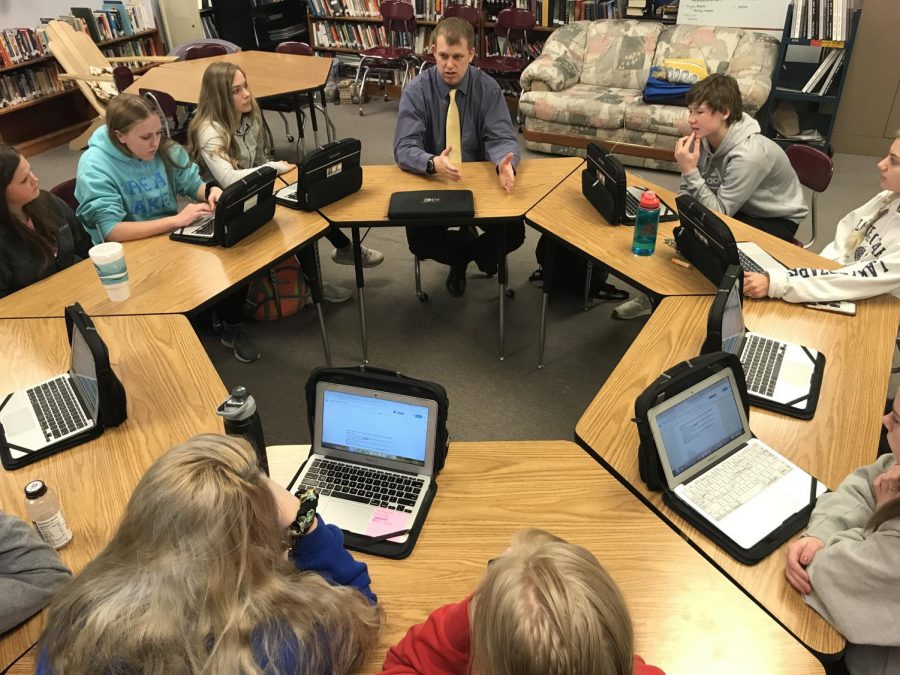 Testing, testing, one, two, three. This spring a change in testing has come to AHS and many schools across the country. Students will no longer sharpen their number two pencils to fill in the circles but instead will type or click their responses on computers.

ACSD Curriculum Director James Northwick met with a group of Journalism Production students to discuss the new testing that will take place on March 27 and April 3 at the high school.

Students of Iowa will now be taking the Iowa Statewide Assessment of Student Progress (ISASP) in place of the Iowa Assessments. Grades three through 11 will take the mathematics, language arts and writing portions and grades five, eight and 10 will also take the science portion. Sophomores may wonder why they are singled out for the extra test. “I would love to explain a lot more but it’s new to everyone,” Northwick said when saying the state of Iowa has determined that science will be tested in only three grades.

The change in testing comes from the Federal Government, which has transitioned from the “No Student Left Behind Act” to the “Every Student Succeeds Act”–which altered the guidelines for state testing. The Iowa legislature and state school board looked into possible tests to substitute for the Iowa Assessments but “didn’t see eye to eye,” Northwick said. In the end, Iowa chose the ISASP.

Another change affects the time students may spend on each test. This was decided by the designer of the test, Pearson. Although there is no time limit, students must finish each test the same day they begin it.

Some students have tried out the new test format by taking the practice tests available on the Pearson website. Sophomore Kynzie Steffens said, “It wasn’t as bad as I thought it would be. It’s something different.” She said the writing portion “was a surprise.” Unlike the Iowa Assessments, the ISASP requires students to write in response to three reading passages.

Freshmen Aspen Niklasen and Braden Atkinson have also taken the practice tests. “I feel like it’s really last minute,” Niklasen said about switching from the Iowa Assessments to the ISASP. She said that she doesn’t like change and that there’s no spell check on the writing portion which is “not a good thing.” Atkinson said a positive on the new testing format is the ability to go back and check over answers which may be helpful to many students.

Atlantic High School principal Heather McKay has faced challenging tasks as well with the new upcoming test. McKay said that scheduling has “tripped (her) up the most” due to only sophomores having to take the science test. Furthermore, Wednesday, April 3, has now been switched to a full day in order to make up for snow days.

“We’re trying to anticipate all of the what if’s. It has a lot of greys and I’m trying to make my way through that grey,” McKay said. She has reached out to faculty and staff at AHS to get their input on scheduling because “many minds are better than just one.” She said she thinks the attitudes of students along with staff will be the biggest factor and would like for everyone to have a positive mindset.