"The Mule" is here with stars Bradley Cooper and Clint Eastwood. 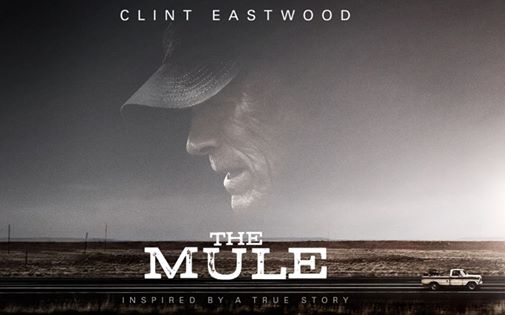 As you already know, there will be spoilers ahead. Probably of both the major and minor variety. Leave now or forever hold your peace.

I’ll begin with a basic plot explanation for those of you rebels who haven’t seen the movie. “The Mule” is about an old man named Earl Stone (played by the aged Clint Eastwood) who is a florist. Poor Mr. Stone goes through a tough time with his finances and the poor guy’s house gets foreclosed. Earl was definitely more of a worker when he wore a younger man’s clothes so he had a rocky relationship with most of his family, including his wife. So when his house gets foreclosed, Earl decides to take up this guy named Rico’s idea of driving in order to make money. He doesn’t actually know at first that he’s working for the cartel but he soon figures it out. While all of this is going on, we also see the DEA (Drug Enforcement Administration) trying to track him down and stop his drug trafficking. The agent that was on his trail was Agent Colin Bates (played by the ever-so-versatile Bradley Cooper) along with Trevino (played by the tiny Michael Peña). It was very difficult for the agents to track Stone down because he always drove legally (never sped or anything) and he also actually met the agents at one point and they never suspected Stone would do something like that. In the end, he was caught and he was put on trial. He ended up pleading guilty to all charges and they sent him to prison where he worked with the flowers.

Now, Earl did not have a filter when it came to talking to anyone. When he talked to the agent, he gave him advice about what not to do about his family issues. In the end, they showed how Stone’s character had grown very well.

When Stone would get the drugs, he would go to this tire shop pretty much in the middle of nowhere and he would pull into their garage and there were four guys who would usually be in the garage. These guys would have the drugs and put it into the bed of this old man’s truck and they would have conversations while doing it. I feel like they did an alright job showing how that relationship grew despite what they were doing.

I know I don’t usually comment on the mechanics of a movie but I felt like this movie did a nice job with the mechanical aspect. The movie flowed and there weren’t many moments when I felt uncomfortable with how the camera was placed.

All in all, I enjoyed watching this movie. It may not have been my favorite movie but it was still really good.